How do I claim WorkCover (Vic)? This page outlines the step-by-step process to lodge a WorkCover claim as an injured worker in Victoria.

Unfortunately, this page only applies to Victorian claims. If you are wishing to lodge a claim relating to another state or territory, you should contact the relevant government body who can advise you as to the process.

If you want to understand in detail how the Victorian WorkCover claim process works, then you can visit this page.

If you want a detailed breakdown of each of the four potential WorkCover entitlements, then you can visit the following pages;

This page goes into detail about the three criteria that you must meet in order to be entitled to claim WorkCover in Victoria.

In a nutshell however…

…(1) there needs to be a connection to Victoria, (2) an injury (which can be physical or mental) and (3) you must be considered a worker under the act.

The above three points are all you need to determine whether you have an entitlement.

This is what the WorkCover claim form looks like in Victoria. 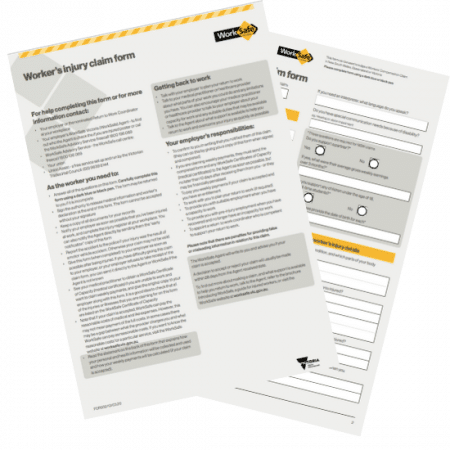 You are able to get a copy of the claim form here.

Completing, signing and lodging this specific claim form is the only way that you are able to initiate a WorkCover claim in Victoria.

If you have not previously completed one of these forms then it is likely you do not have a WorkCover claim for a particular injury or condition.

If you’ve been told that a claim has been lodged on your behalf by someone but you haven’t signed this specific claim form, then it’s likely you do not have a claim.

It is also important to note that only you as the injured person is able to sign this claim form.

Others can lodge it on your behalf, but they cannot sign it.

Some people believe that by going to the doctor and getting a certificate of capacity that a WorkCover claim has been initiated. This is not correct and you can read more about that here.

It is important that the WorkCover claim form be completed with care and attention.

It must be accurate.

Anything that you write on the claim form could possibly be used by the WorkCover insurer to reject your claim.

For example, if your injury is a gradual process injury (that is it is occurred over a period of time rather than on a specific occasion) but you write that it occurred as a result of a specific incident, in some instances your claim may be rejected.

Likewise, if you do not for example list any previous injuries – even though you believe they may not be relevant to the claim – your claim may be rejected.

So keep this in mind. Anything that you write on the workers injury claim form can potentially be used by the WorkCover insurer to reject your claim.

If your claim is rejected this could mean that you may need to go to conciliation which can add another month or more to the processing time during which you are not entitled to be paid weekly payments of compensation from WorkCover if you are not able to work.

This is particularly relevant for casual workers given they don’t have any leave entitlements.

It’s also particularly relevant for those that may not have an adequate amount of sick leave, annual leave or long service leave to cover the claim determination period.

If the claim fails to resolve at conciliation, and many rejected claim matters do not, if you choose to pursue the matter further you’re potentially adding six months or more in terms of delay.

Many matters where a claim has been rejected will not resolve at conciliation. Typically what the insurer may do is offer you to settle your claim for a limited period of weekly payments and/or medical and like expenses.

And even if your claim is accepted initially, whatever you write on the claim form can potentially be used by WorkCover or their lawyers any time during the life of your claim.

Once you have adequately completed the claim form and signed it, then it must be lodged.

A WorkCover claim can be lodged by:

Most people will provide their claim form to their employer.

Some people however prefer to send it directly to the WorkCover insurer.

If there has been a breakdown in the employer/employee relationship and the WorkCover insurer is not known, then a small number of people will send the claim form directly to Worksafe.

Either way, the employer will be provided with a copy of the claim form.

They will then need to send the claim form off to the insurer for processing.

The law in Victoria says that a person must provide an employer a copy of the WorkCover claim form within 30 days of injury.

If a claim is provided outside 30 days in some instances it may be rejected on this basis.

However, the law also says that the 30 day period maybe extended if there are reasons as to why it was not reasonably practicable to lodge the claim and the reality is that a large number of WorkCover claims are lodged outside the 30 day period.

If your claim is going to be rejected, it is unlikely that it will be rejected solely on the basis of it being lodged outside the 30 day period.

Once the claim form has been lodged whether that be sent to the employer, insurer or WorkSafe, then you should record the date that this was done.

You should also receive a copy of the completed claim form once it has been signed by your employer.

After the claim has been lodged

Above are the steps that you need to take to claim WorkCover in Victoria.

What happens once the claim has been lodged is that that the insurer will acknowledge receipt of your claim.

They will send you a letter or an email.

You should receive this correspondence within a few days of your claim being received by them.

This means that if you do not receive this then potentially your has not been lodged on your behalf and you should follow things up.

Once the insurer receives the claim, they will organise an appointment for you to be medically assessed by a doctor that they choose.

This is called an independent medical examination (IME).

In some cases they will also organise a circumstance investigation report.

Once the claim has been processed and a decision has been made by the insurer, the insurer must give written notice of decision to either accept or reject the claim.

They will usually call you in addition to sending you a letter/email with the outcome.

If your claim is accepted then you are entitled to receive medical expenses and if you are claiming them – and if you have provided a certificate or certificates – weekly payments.

If your claim is rejected then should you wish to pursue the claim further you can either ask the insurer to perform an internal review or go to conciliation.

We recommend that you go straight to conciliation rather than having the insurer do an internal review.