Continuation of weekly payments after 130 weeks 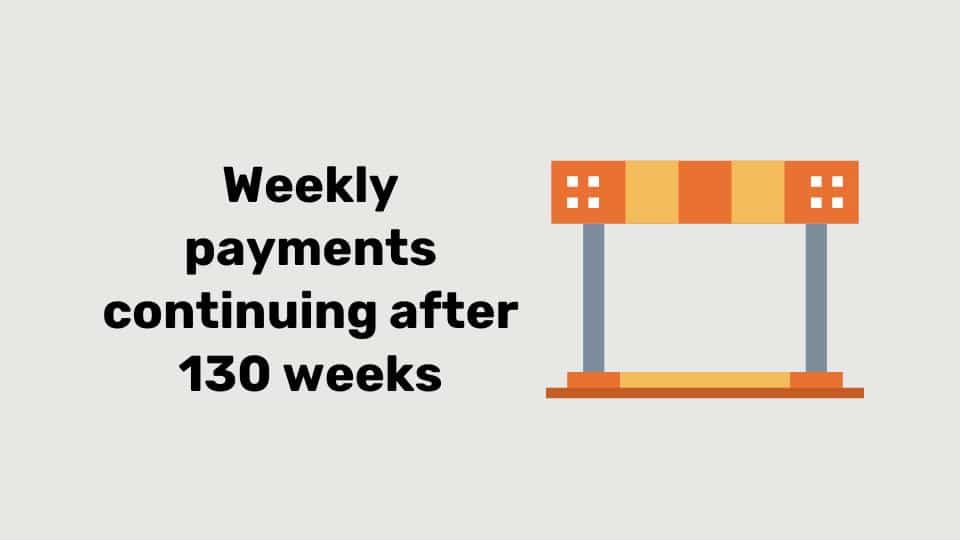 In most instances, once a person on weekly payments hits the 130 week mark, their payments are likely to be terminated.

There are two instances in which a person will be entitled to weekly payments continuing beyond the 130 week mark.

The rest of this page will explore the matter further.

If a person has been in receipt of weekly payments and they are approaching 130 week mark, usually at about the 100 week mark (give or take), the WorkCover insurer will start the process of obtaining medical material that addresses the issue of work capacity.

Sometimes in matters where it is clear that a person has a work capacity, ( e.g. if they have returned to work) they will not obtain material addressing the issue of work capacity because it is unnecessary.

However in most Instances where the issue of work capacity is less clear, the insurer will seek to obtain medical material.

This material will usually be made up of material from your treating doctor/s, an independent medical examiner, and/or a vocational assessment.

The vocational assessment report is very important in terms of the insurers decision making.

The aim of this vocational assessment is to determine whether there are any jobs out there that you are capable of doing.

If the vocational assessor is able to identify one or more jobs that you are capable of performing, then the insurer will usually terminate your weekly payments at the 130 week mark.

Vocational assessments reports relating to the 130 week test typically cause a lot of frustration for injured workers (and their lawyers).

The main reason for this is because of the jobs that are suggested.

For example: a person may have spent their life working as a nurse.

However, a vocational assessment report may conclude that a person could work as a console operator, or in a retail job, or in a number of other jobs that a person either has no experience in, or (more importantly), has no interest in.

But – and this is important to keep in mind:

The test to stay on weekly payments beyond 130 weeks is: do you have an incapacity for work, and is that likely to continue indefinitely?

If you do have an incapacity for work that is likely to continue indefinitely (which is supported by medical opinion), then you are likely entitled to remain on weekly payments beyond the 130 week.

If it is determined you have a capacity for any job, then your payments can be terminated.

Option one – no work capacity

The first way for weekly payments to continue beyond 130 weeks on WorkCover is if you are considered has having no work capacity and this is likely to continue indefinitely.

This is a difficult test for many people to meet however.

This is because you need to show that not only can you not do your old job, but that you can’t do any job.

If there are one or two jobs that the insurer believes you can do, then this will likely be enough for them to terminate your weekly payments.

Disputes regarding payments being terminated at 130 weeks are common under the WorkCover system.

And typically, when these matters proceed to conciliation they do not resolve.

It’s very rare for the WorkCover insurer to withdraw their notice to terminate a persons entitlement to weekly payments at 130 weeks at conciliation.

This is unless there is a significant medical issue that was not addressed appropriately in the material that the insurer used to make the decision to terminate your entitlement to payments.

Sometimes what may happen at conciliation is that the WorkCover insurer will make an offer to resolve a persons weekly payments.

This offer may be something like paying you your payments to date but not thereafter.

So say for example that since your payments have been terminated you’ve been without WorkCover payments for a total of eight weeks to the date of the conciliation conference.

The insurer may make an offer to pay you eight weeks of weekly payments (or less than that) with payments to cease thereafter. If you were to accept an offer like this at conciliation you would not be entitled to payments beyond the eight weeks.

If the matter doesn’t resolve at conciliation, your options are to pursue the matter to the medical panel or to the WorkCover Magistrates Court (or not do anything at all).

The lawyers who are representing the insurance company/Victorian WorkCover Authority to refer the matter to the medical panel anyway. Copyright notice – this is original content from TheWorkInjurySite.com.au.

At what rate is payment made?

If you obtain payments beyond 130 weeks based on having no work capacity, you are entitled to receive weekly payments of the 80% rate.

Option two – returned to work but not earning pre-injury income

If after the 130 week mark you have returned to work, whether that be with the employer with which you suffered injury, a new employer or even in self employment, for at least 15 hours per week;

And if you are in receipt of current weekly earnings of at least $177 per week;

And if you are likely to continue indefinitely to be incapable of undertaking further work which would increase your weekly earnings – it is possible to obtain payments beyond the 130 week mark over and above your wage.

Typically the insurer won’t suggest these payments are an option for you.

Insurers have their own forms so if you fall into this category of having returned to work then you should contact your insurer and ask them to provide you with a copy of the relevant form.

Medical material will be required from your treating doctor/s confirming that because of your work related injury, illness or condition, that you are not likely to be able to increase your work hours in the future.

At what rate is payment made?

Or, the difference between $1510 and 80% of your current weekly earnings, whichever is less.

There are two ways that weekly payments can continue beyond 130 weeks.