Will an employee injured at work automatically receive compensation from their employer? 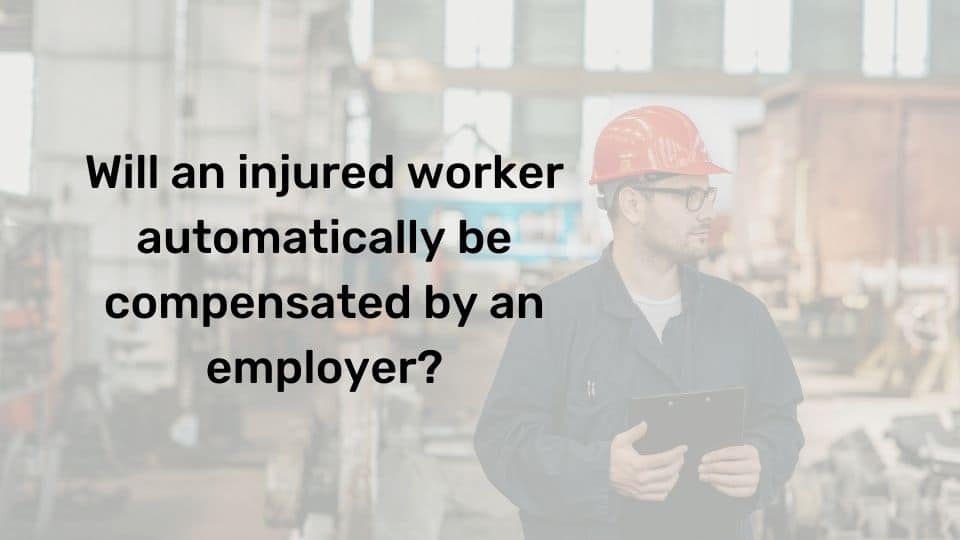 No. In some instances, and employer may offer to compensate a person that has suffered an injury at work by way of payment of medical expenses and/or lost wages. However, there is no obligation on them to do so. In most cases if an employee who is injured at work wants to obtain compensation, they should do so via the lodgement of a WorkCover claim.

If a person suffers an injury at work in Victoria, whether that injury be a minor injury that resolves in say a couple of weeks, or a very significant injury that persists, there is no obligation on an employer to pay compensation to the injured worker.

There is no obligation on them to pay for medical treatment, for any lost wages, or a lump sum for pain and suffering or loss of earnings into the future.

In Victoria, employers are required to have WorkCover Insurance.

So if any of their workers are injured, then this insurance can be utilised to assist the injured worker.

The employer can provide compensation

As mentioned above, there is no requirement that the employer compensate an employee that is injured at work.

When this does occur, usually an employer will pay for medical expenses and sometimes for some loss of wages if a person cannot work to the same extent that they were working prior to the injury.

However, there’s a couple of things you need to keep in mind if this is applicable to you.

In our experience, usually what will happen if an employer agrees to pay for a workers medical expenses after an injury is that they’ll pay for a limited period of time, say a few months only.

If the employer has paid some compensation initially but then stopped paying, a person can still lodge a WorkCover claim (discussed later on).

The fact that the employer has paid you some compensation does not prevent you from lodging a WorkCover claim and having it accepted.

Keep in mind however that in some instances, the more time that passes after an injury before a person lodges a WorkCover claim, the more difficult it can be to have the claim accepted.

Employer not likely to compensate by way of lump sum payment

We should also point out that it is also extremely unlikely that an employer will compensate an injured person by way of lump sum compensation.

Medical expenses and perhaps payment for some lost wages, yes.

But very rarely will an employer compensate a person by way of a lump sum.

If a worker suffers a work related injury, then they should give consideration to the lodgement of a WorkCover claim.

However there are some considerations and a WorkCover claim is not the best choice for everyone.

If you’re not sure whether a WorkCover claim is the right option for you, we would encourage you to read this page.

A WorkCover claim will provide you with the best coverage

Once a claim has been accepted, you’ll be entitled to the payment of medical and like expenses.

The WorkCover insurer will cover a broad range of medical expenses, which many employers would be unlikely to pay for (eg: surgery expenses).

You can also obtain weekly payments of compensation from WorkCover for up to 130 weeks post injury and potentially beyond that if you’ve got no work capacity which is likely to continue indefinitely.

The first lump sum claim is called an impairment claim and the second is a common law claim for damages.

If an employee is injured at work, they will not automatically receive compensation from an employer.

Some employers will offer to pay some compensation however.

This will usually be for medical expenses and perhaps some lost wages resulting from the work related injury, however this is not common.

Employers in Victoria required to have WorkCover insurance to cover their employees in the event that they suffer injury and for this reason, if you have suffered an injury at work, you should consider the lodgement of a WorkCover claim as opposed to being compensated directly by an employer.