How to appeal a WorkCover decision (explained)

If this does not get them to change their decision, then you should complete and lodge a request for conciliation form. This form initiates the conciliation process. You can get a copy of the form here.

The matter will then be set down for a conciliation conference, which will usually occur within a few weeks after lodgement of the form. Currently, most conciliation‘s are held over the phone.

If the matter does not resolve at conciliation, then you can appeal the decision further by electing to proceed to the medical panel or to the Magistrates’ Court. 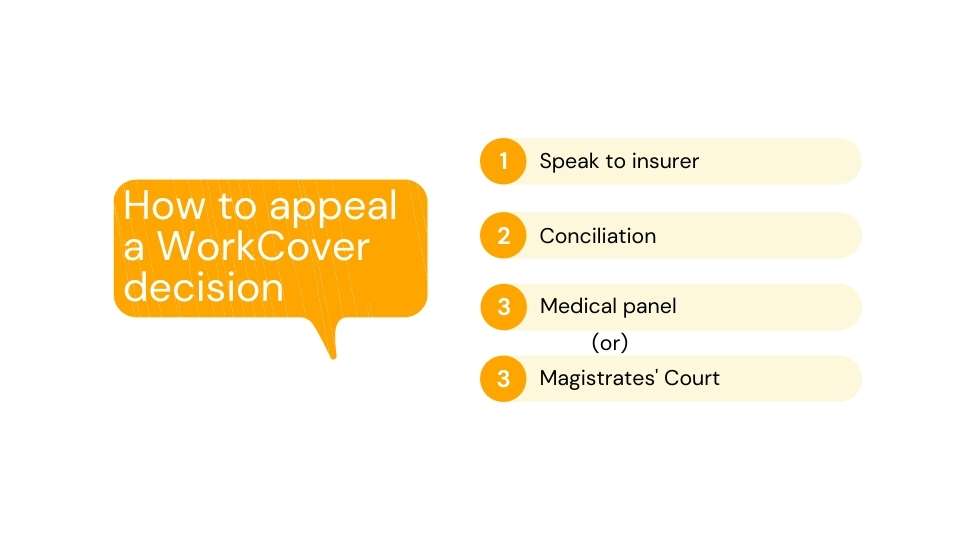 Step 1 – speak to the WorkCover insurer

If the insurer makes a decision that you want to appeal, it’s a good idea initially to speak to them over the phone.

Ask them why they made the decision and ask them to review it.

Give them a few days and if you do not hear from them you can either follow them up or proceed to step two (below).

Most times, the insurer will not change their decision. But occasionally, they will.

For example, sometimes they may make a decision because they are simply waiting on further information in relation to an issue.

They may, for example, be waiting for your treating doctor to return a form.

In cases such as this, you can then chase up the information and make sure it gets to the insurer.

This can then result in the insurer changing their original decision.

Calling the insurer before taking the following steps can help resolve matters as quickly as possible.

If in the above example you instead decided not to contact the insurer and immediately proceed to step two (lodging a request for conciliation) this can delay things.

You should only proceed to step two if you actually need to.

If it is clear that the insurance company will not change their decision, then you will need to complete and lodge a request for conciliation form. This will initiate the conciliation process. If you have a representative such as a lawyer or someone else, write their details in the space indicated.

They will receive any information that may be relevant to the dispute from the accident compensation conciliation service and the insurance company.

List what the dispute relates to. You do not need to go into too much detail, simply state what the dispute is. It’s sufficient, for example, to write something like talking marks insurance decision not to pay physiotherapy costs).

Once the form has been completed, it should be sent off to the Accident Compensation Conciliation Service.

They will acknowledge receipt of your form and will then set down the matter for a conciliation conference.

The conciliation conference generally speaking will occur about to eight weeks after you lodge the form.

Conciliation will, generally speaking, occur over the telephone. Prior to covid, most conciliations were in person but for obvious reasons this has changed.

It’s always a good idea to speak to the insurer prior to conciliation.

This is to see whether there is any prospect of them changing their decision without the need for a conference.

The reason it is worthwhile speaking to them again even if you have spoken to them initially is because the person from the insurance company that is handling your matter is likely to be a different person to your claims manager or the person that made the original decision.

So, they may see things differently.

Any opportunity you can take to get matters resolved as quickly as possible you should take.

If your matter proceeds to conference, then the parties will discuss the matter between themselves.

Sometimes the matter may resolve by way of negotiation between the parties which may involve the insurer withdrawing their original decision, or the parties can agree to compromise the matter.

Sometimes, the conciliation officer will recommend that the insurer change their decision but this certainly does not happen often.

If the matter does not resolve at conciliation there are two possible options.

If the matter doesn’t resolve at conciliation one option you have if you wish to pursue the matter further is to go to the medical panel.

The medical panel is explained here.

In a nutshell, the medical panel involves you seeing a panel of doctors, all generally at the one appointment.

You would see, in most cases, between two and four doctors at the one time.

These doctors would be tasked with make a decision regarding the issue in dispute.

You do not need to file any paperwork to refer a matter to the medical panel from conciliation. The conciliation officer will handle this for you.

However, you should ensure that the medical panel have medical material that supports your position, well prior to the panel appointment.

If you have a lawyer, then they should take care of this for you.

You can expect to see the panel about a month or two after the conciliation concludes.

If the dispute in question involves factual issues (e.g. if there is a dispute regarding whether an injury happened in the way you said it did) then you cannot refer a matter to the medical panel.

This is because the medical panel is only able to deal with medical questions and not factual disputes.

After you have seen the medical panel, they will make a decision which will be in writing.

This decision will be sent to the parties.

The decision of the medical panel is final and binding.

However, in limited circumstances, you can appeal a medical panel decision however it is very rare to do so.

To give yourself the best chance at succeeding at the medical panel, I’d recommend that you do it obtain advice from a lawyer.

If your matter does not resolve at conciliation, the second option that you have is to proceed to the Magistrates Court.

If you would like to go down this route, I’d advise that you seek the assistance of a lawyer.

In order to initiate magistrates court proceedings after a conciliation, you need to file particular paperwork with the Magistrates Court.

The court will then set the matter down for what’s called a mention and then later they will set it down for a hearing.

It can take six or more months from when you issue proceedings in the Magistrates Court before your matter gets reached.

This is unavoidable due to the backlog of cases that need to be dealt with by the court.

Your matter can resolve by way of negotiation between the parties or it can proceed to hearing before the Magistrate.

Keep in mind however that most matters will not be heard before the Magistrate and will rather resolve by way of negotiation between the parties.

A further thing that can happen if you issue Magistrates Court proceedings is that the other side can request that the matter be referred to the medical panel.

So it is quite possible that even if you elect to proceed to the Magistrates Court after conciliation, you can in fact be referred then from there to the medical panel.

To appeal a WorkCover decision, you should speak to the insurer first to see whether they will review and potentially change their decision.

If they don’t, then you can go to conciliation and if the matter fails to resolve there you can go to the medical panel or the Magistrates Court.