What happens when my WorkCover matter goes to the Magistrates’ court in Victoria?

If you’ve been on WorkCover for long enough, at some point the WorkCover Insurer may make a decision that you disagree with.

For example, they may stop paying for physiotherapy treatment or for a certain type of medication.

Or they may alter or terminate your weekly payments

If the insurer makes a decision that you disagree with then the first step in the process is usually to appeal the decision to conciliation. Conciliation is a process whereby with your representative, you discuss the matter with a representative from the WorkCover Insurer and the Accident Compensation Conciliation Service to try and resolve the matter.

If the matter doesn’t resolve during the conciliation phase, and you believe there is merit in contesting the decision further, one of the options you have is to proceed to the Magistrates Court.

How do I issue proceedings in the Magistrates Court in my WorkCover matter?

In order to commence proceedings, you’ll need to file what’s called a complaint and statement of claim. These are formal court documents that outline your case and what you are seeking.

These documents must also be served on the opposing party.

The opposing party will then be required true to draft their defence material. This is a response to your material.

How long does it take my WorkCover matter to get to court?

From the time of issuing court proceedings, it can take a few months before your matter reaches court. This depends upon how many cases are before you and that need to be dealt with.

It also depends on the court. Some regional courts may not be as busy, and your matter may get reached quicker.

To give you a general idea as to how long it might take, you should assume it will take at last six months before your matter gets reached.

Is there any way for me to speed things up?

Unfortunately, waiting for this six months or more is unavoidable and is the result of there being many other WorkCover cases that need to be dealt with. 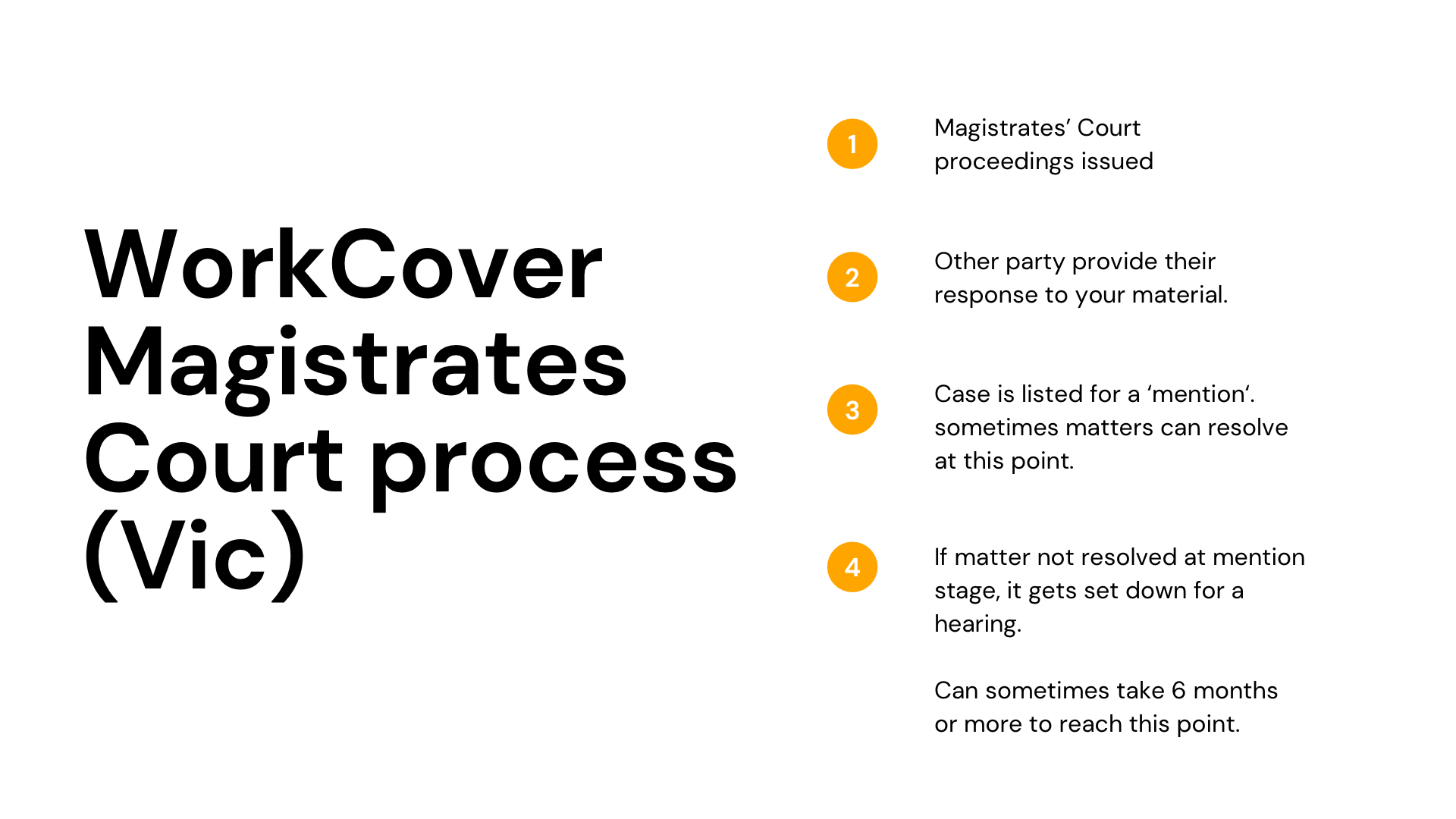 What happens when my case gets reached?

Your case will generally be listed initially for what is called a mention. This is an administrative appearance that generally does not require an attendance by you.

At the mention, the parties will discuss the matter between themselves. In some cases, matters can resolve at mention stage.

When they don’t resolve, they usually get then get set down for hearing.

What are the chances of my WorkCover matter being heard in court?

Even if your matter is listed for hearing, you need to be aware that it is more likely to resolve by way of negotiation between the parties than it is to run in court in front of a Magistrate in court.

The other alternative, if the matter involves a medical question, is it the other party will seek to refer the matter to the medical panel to deal with.

What happens at the WorkCover Magistrates’ court hearing?

If your matter is one of the matters that actually proceeds to hearing, this is how that works;

Your matter will be heard before a magistrate alone in court. There is no jury and there is no judge.

Your matter may involve you giving evidence along with other witnesses. These witnesses maybe lay witnesses (e.g. past workmates) or they may be medical witnesses such as doctors.

Giving evidence means being in the witness box and getting asked questions by your lawyer and the other sides lawyer.

Depending upon the nature of your matter, your WorkCover Magistrates’ court matter could run for anywhere from at an hour or two all the way up to a few weeks.

Once the matter has concluded, the Magistrate will hand down their decision. Sometimes this decision can be given immediately. Other times it can take a few weeks or months.

If it does take a few weeks or months, your lawyer will let you know once that decision has been made.