Are casual employees entitled to WorkCover? Yes. As a casual employee in Victoria you are protected by the WorkCover scheme as a permanent worker would be.

This means you can pursue a WorkCover claim just like any other permanent employee that’s injured at work.

Unfortunately, many people are not aware of the fact that the WorkCover legislation applies not only to permanent employees, but also casual employees.

This is understandable. After all, casual workers aren’t entitled to the same entitlements (annual leave, sick leave, long service leave) as permanent employees. And they usually don’t have guaranteed hours of work.

That being said, there are some things that you need to keep in mind as a casual worker claiming workers compensation.

What WorkCover benefits can I claim as a casual worker?

As a casual worker, you are entitled to claim the same things through WorkCover as a permanent full time worker.

There are however some small differences – as outlined below. 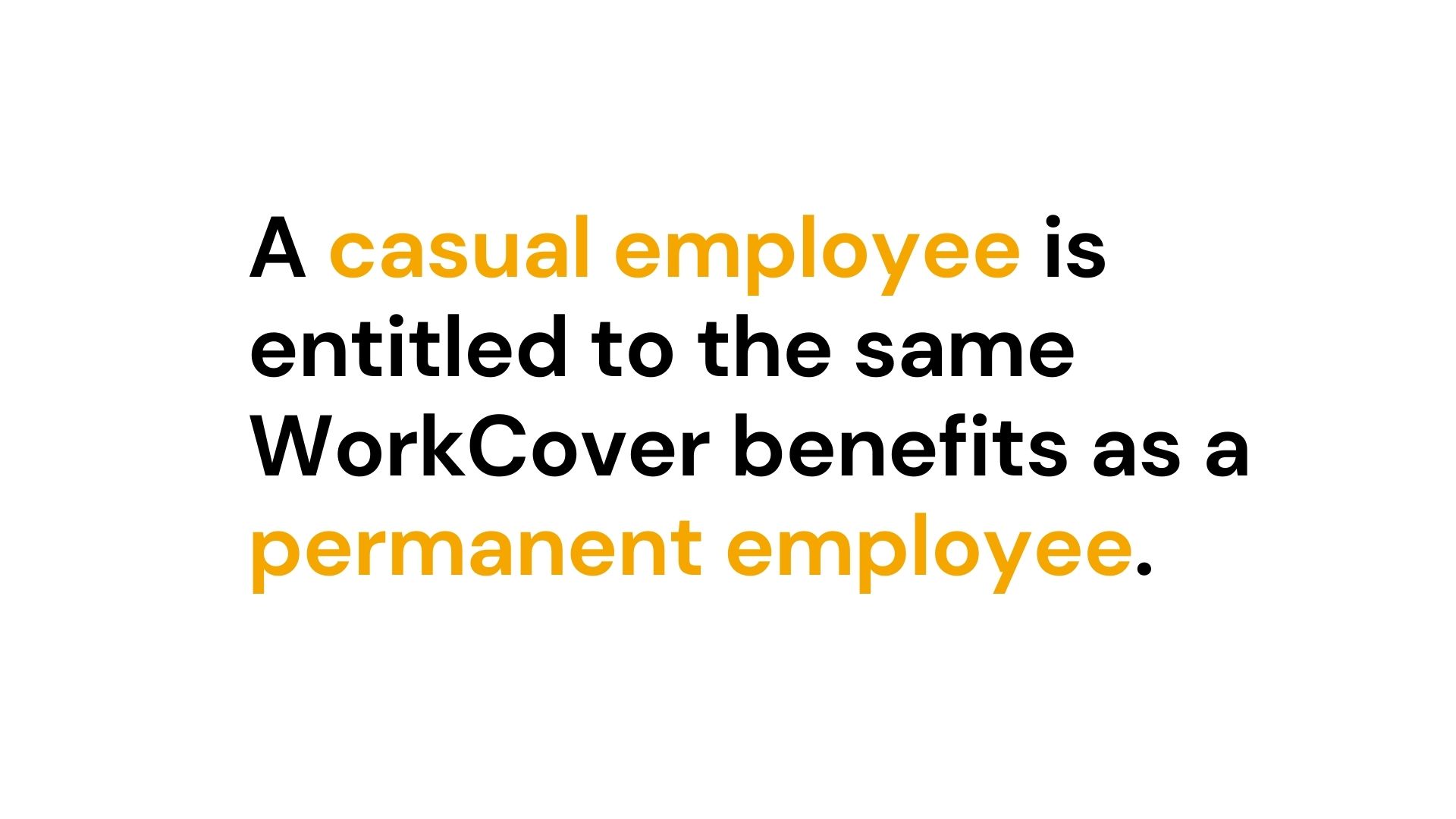 Just like a permanent worker, as a casual worker you are entitled to claim the payment of the reasonable costs of medical and like expenses from the WorkCover Insurer.

The medical expenses that you are claiming must be reasonable and they are set out in the legislation.

Just like a permanent worker, as a casual, the WorkCover Insurer will pay you weekly payments if you can’t work to the same extent as what you were doing prior to the injury. Sometimes this means that you can only do some of what you would normally do, other time it’s because you can’t work at all

In order to claim weekly payments you need to obtain certificates of capacity from your treating medical practitioner or another health professional.

How long will I get weekly payments for as a casual?

You ‘re entitled to 130 weeks of weekly payments.

Most of the time the insurer will terminate weekly payments at 130 weeks.

After 130 weeks, in order to continue to obtain weekly payments you need to show that you don’t have a work capacity and that this is likely to continue into the future.

If you do not have a work capacity, then you are entitled to payments in addition to 130 weeks.

Weekly payments are based on what’s called your pre-injury average weekly earnings (PIAWE).

The way the pre injury average weekly earnings figure is calculated is that an average of your earnings over the last 12 months before the injury must be taken.

This figure is then averaged and it becomes your pre-injury average weekly earnings figure. This is the figure on which your payments are based.

As a casual, if you’ve been employed for more than 12 months with an employer, you need to calculate the average number of hours that you’ve worked each week over the past 52 weeks.

You need to disregard any earnings that occurred post 52 weeks for the purposes of this calculation even though you may have earned more during that period.

If you have been employed for less than 12 months with this employer, you need to calculate the average number of hours that you’ve worked each week since you commenced work.

So if you’ve only worked with the employer for a month, that’s what you need to base the figure on.

This can sometimes be a little bit unfair for casual workers because when they’re beginning employment in a new job as a casual worker, their hours can be a fraction of what they would be as time goes on when they get more work.

Unfortunately though that’s what the law says and that’s how the PIAWE figure must be calculated.

Just like if you’re a permanent worker, if you suffer an injury at work you can potentially pursue a claim for impairment benefits.

This is a lump sum for permanent impairment.

There really is no difference between being a casual worker and a permanent worker for the purposes of an impairment claim.

As a casual worker, you can pursue what’s called a common law claim for damages just like a permanent worker can.

You can be compensated for pain and suffering and economic loss.

Economic loss can sometimes be a tricky thing to calculate for casual workers.

Calculating economic loss is about taking a before and after picture as to your earnings.

That is, what were you earning prior to the injury in the years leading up to it, and what have you earned since the injury.

As a casual worker, there is a greater chance that your earnings both pre-injury and post injury will fluctuate more than a permanent full time employee’s income would.

The other thing to keep in mind is that there is a test that you must satisfy in order to claim economic loss. Not everyone that is injured at work is able to pursue a loss of earnings claim.

You must show that as a consequence of the injury, you’ve suffered a 40% loss of earning capacity. To illustrate this, lets say that you were earning $1000 week in week out prior to the injury. You’d need to show that there is no job out there that you could now do where you would earn $600 or more per week as a result of your injury.

As a casual, in a general sense you might be at a disadvantage in satisfying this 40% loss of earning capacity test.