Have your WorkCover payments stopped? 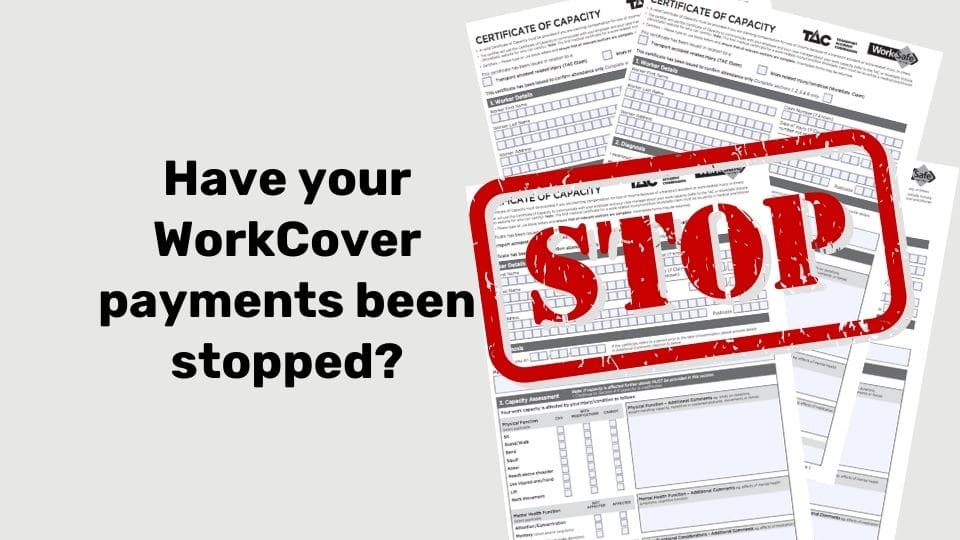 There are a number of reasons why your WorkCover payments may have stopped.

Common reasons are: if you have made a return to full unrestricted work duties, or if you’ve reached the end of the second entitlement period.

There are also other reasons however why your weekly payments will stop which will explored further on this page.

If your payments have stopped, there are options open to you to contest the insurers decision.

Here are the most common reasons as to why your payments may have stopped;

If you’ve been off work completely as a result of a work related injury, or if you’ve been partially off work, you may have been paid weekly payments.

If you have an injury that no longer impacts upon your work capacity, and this you are being certified as having a capacity to return to work on full, unrestricted duties, then you do not have an entitlement receive weekly payments.

You would only have an entitlement to receive weekly payments if there is some impact on your ability to work.

Likewise, if you’re able to return to employment working the same hours as you were pre injury, but perhaps in a modified role, again you would not have an entitlement to receive weekly payments.

For example, let’s say that we work in a job that requires manual handling and during the course of your employment you suffered injury to your shoulder.

You take some time off work and eventually, over time, gradually increase your hours and return to your full pre-injury hours.

Regardless as to whether you are doing your pre-injury duties, if you have made a return to your pre-injury hours and you are earning what you did prior to suffering the injury, you will not be entitled to be paid weekly payments.

As such, your payments will stop.

Now, if for example you return to work and your payments stopped, however you go off work again because you’re not able to cope with the work given your injury, you can potentially be paid weekly payments again (assuming that your entitlement to weekly payments has not been exhausted).

You can read about the 130 week mark here.

It is a very important point under the WorkCover system if you’ve been receiving weekly payments.

In most cases, if you’ve been in receipt of weekly payments, your payments will be terminated at the 130 week mark by the WorkCover insurer.

You will only be entitled to receive payments beyond 130 weeks if you have no work capacity and this incapacity for work is likely to continue indefinitely.

And importantly, when it comes to work capacity relating to the 130 week test, you need to show that you not only have an incapacity for your old job, but any job.

As such, this can be a very difficult test for people to satisfy and it is for this reason that most people who are on weekly payments have their payments stopped at the 130 week mark.

Non-compliance with the insurer and return to work obligations

The WorkCover insurer may stop your weekly payments if you do not comply with reasonable requests from them.

What does that mean?

Well, for example, the insurer may organise a medical appointment for a person to be assessed and that person may choose to not attend simply because they didn’t feel like it.

Or, they do not appropriately engage in return to work or rehabilitation programs organised by the WorkCover insurer.

An incapacity no longer related to your employment

A person may be in receipt of weekly payments, but medical opinion may be obtained by the WorkCover insurer that suggests that although a person has an incapacity for work, it may no longer be related to employment.

This one is not uncommon.

Sometimes if a person has not provided WorkCover certificates, or a certificate doesn’t adequately cover a certain period, or if a certificate isn’t provided to the insurer early enough after the previous one has run…

The WorkCover insurer may look to stop a persons payments.

Also, sometimes certificates are not appropriately completed – for example a worker may not have signed the section at the bottom of page two indicating whether they have or have not worked during the period the certificate covers. Copyright notice – this is original content from TheWorkInjurySite.com.au.

The above are the most common reasons.

What can be done if payments are stopped?

If your payments have been stopped it is always a good idea to obtain legal advice to discuss your options and your chance of succeeding in contesting the decision.

What follows is general advice that you can follow if your payments have been terminated or stopped and you wish to contest the insurers decision.

Step one – contact the insurer to discuss the matter

You (or your lawyer if you have one) should contact the WorkCover insurer to discuss the matter with them.

If the issue is relatively straightforward, this is usually the quickest way to deal with the matter.

For example, if the reason that your payments have stopped is simply because your last certificate of capacity that you provided to the insurer has not been signed, this would be a relatively simple and quick fix.

This being said, there are times when your payments have stopped where contacting the insurer probably won’t do you any good.

Conciliation is a process whereby the parties will discuss the matter and try and reach a resolution with the assistance of a conciliator from the Accident Compensation Conciliation Service.

We have written about conciliation on this page.

If the reason for your payments being stopped is purely related to a medical reason, perhaps for example you’ve hit the 130 weeks mark and you say that you do not have a work capacity and the insurer says you do have a work capacity – then proceeding to the medical panel may be appropriate.

The medical panel is only able to deal with medical disputes.

Instead, you would need to proceed to the WorkCover Magistrates court.

Get some WorkCover advice

This is a optional however in our opinion getting advice from a lawyer or another advisor is important if your payments have stopped.

There are many reasons why your weekly payments may have been stopped.

The most common reasons are; if you have made a return to full unrestricted work, you’ve reached the end of the second entitlement period (post 130 weeks), and that there is an issue with your certificates of capacity.

Other reasons are: that you’ve not complied with a request from the insurer, that the injury is no longer materially contributed to by your employment, termination of your employment due to serious misconduct, and prison, fraud, or death.