Economic loss and compensation for loss of income

If a person suffers an injury at work and their ability to work is impacted, under the WorkCover scheme there are two ways that they can be compensated for their loss of income.

The first is by the payment of weekly payments and the second is via the economic loss component of a common law claim.

This article will look at both, including breaking down how they are calculated and explaining why you will not be compensated 100% for what you’ve lost.

Weekly payments to compensate for loss of income

In order to be entitled to claim weekly payments you must have an capacity for work of some sort.

Put simply, if you are not able to work to the same extent that you were prior to the injury, then you are likely to be entitled to claim weekly payments.

Weekly payments are based on your pre-injury average weekly earnings (PIAWE).

To calculate your PIAWE, you need to take the average of your ordinary earnings in the 52 weeks prior to suffering the injury. This is if you’ve been employed continuously by the same employer.

So if you’ve been with this employer for three months then you need to figure out a weekly average earning over that three month period.

If you were promoted or appointed to a different position during the 52 week period, keep in mind that if the promotion resulted in an increase in your earnings (and it wasn’t temporary) then the relevant period during which your calculation needs to begin is the day on which the promotional appointment takes affect.

When calculating what your ordinary earnings are, this means your base rate of pay for ordinary hours worked in a particular week in addition to any commissions or any peace rates that you’ve received in relation to that in respect of that week.

Or if your ordering earnings are not calculated on the basis of normal hours worked then your actual hours including any amount for the performance of the work, and the monetary value of residential accommodation motor vehicle, health insurance education fees

When calculating when claiming lost income by the weekly payment route, there are three distinct periods that you need to keep in mind.

If you can’t work at all

For the first 13 weeks, if you can’t work, you’re entitled to get paid at 95% of your pre injury average weekly earnings. The maximum amount that you can be paid is currently $2570 a week.

From weeks 14 – 130, you’re entitled to be paid 80% of your pre injury average weekly earnings. Again, the maximum amount that you can be paid is currently $2570 per week.

If your PIAWE included any overtime or shift allowance, then this ceases at 52 weeks.

From 130 weeks onwards, you’re entitled to be paid 80% of your pre injury average weekly earnings (to a maximum of $2570) if you have no work capacity which is likely to continue indefinitely.

Many people have their payments terminated 130 weeks because in order to obtain payments and additional 130 weeks you have to show that you’ve got no work capacity.

You can read more about 130 weeks and WorkCover here.

If you can work to an extent

If you have a current work capacity, then you’re entitled to be paid at 95% of your pre injury average weekly earnings less what you’re currently earning for the first period.

For the second period, you’re entitled to be paid at 80% of your PIAWE less what you’re earning.

You’re entitled to be paid your shift allowance overtime included in the power calculation for the first 52 weeks.

Your payments will cease at 130 weeks if you have a work capacity. You can get payments in addition to 130 weeks if you’ve returned to work, working at least 15 hours per week earning at least $220 per week, and it’s not likely that you’ll be able to increase your work hours and earnings because of your injury.

Common law claim to compensate for loss of income 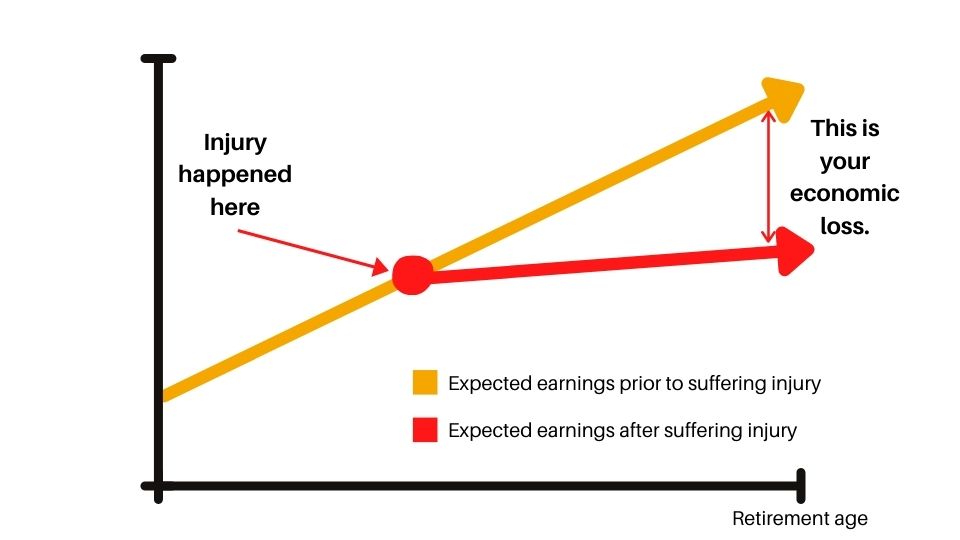 The second way someone can be compensated for lost earnings under the WorkCover system is by pursuing a common law claim with an economic loss component.

In a nutshell however, a common law claim as a lump sum claim that someone can pursue if they suffered an injury at work that is considered a serious injury and if the injury was caused or contributed to by someone else’s negligence

A person is able to be compensated for two things in common-law claim.

The first is for pain and suffering in the second is for economic loss.

In relation to economic loss, not everyone can pursue a claim for economic loss is the first thing that you need to keep in mind.

This means comparing what you were earning before you suffered the injury and what you are likely to earn after the injury.

Your tax returns will be very important here as we will pay material such as payslips.

If you were getting paid cash in hand for work, unfortunately it will be very difficult to take this into account.

The opinions of doctors that are both treated you and provide an assessment will be very important in making this determination.

Here’s an example as to how the 40% test works.

Say that you were working in a job where every week you would earn $1000 a week in week out.

You would need to show that as a consequence of the injury, there’s no drive out there that you would be able to do where you would earn $600 or more per week. That is, you’ve lost 40% of your ability to earn.

The onus is on you to prove that regardless of undergoing re training or rehabilitation that you would not be able to meet this threshold level.

If you satisfy this test then you’ll be entitled to claim loss of earnings.

One thing to keep in mind that if you’re under the age of 26 of the time the injury happened then you will not need to demonstrate that you’ve suffered a 40% loss of earning capacity.

You’ll also not need to satisfy this 40% test if you at the time of the injury we are an apprentice.

How is loss of earnings calculated under a common law claim

Calculating someone’s loss of income under common-law claim after a work injury can be quite complicated.

In a common law claim if certain loss of earnings thresholds are met an injured worker can claim common more damages for economic loss. This article will not cover the threshold test to be able to claim loss of earnings.

If you satisfy the test to claim economic loss, then what that component of your claim is worth will depend upon the evidence as to what your injury causes in terms of restrictions to your ability to work.

Also taken into account is your age, skill set, occupation, training, education and other relevant factors.

The aim is to determine, as best as possible, how many years of work are likely to be left to the inured person, and at what capacity is the person likely to be able to work. That is, full time, partial or not at all.

After considering these factors, there’s then a formula that is used to work out future loss of income.

An easier way however to get an idea as to what your economic loss may be worth is to look at other examples. This page should therefore assist you.

Anyway, back to the formula…

It does not involve multiplying the number of years left working by the lost earnings. This is because there are reductions that need to be made to take into account the possibility that you may not have worked until retirement age.

Also, it takes into account the fact that you’ll be receiving compensation for your loss of earnings in one go, rather than a yearly salary paid over time.

Generally speaking, the younger a person is at the time of the injury the greater the amount of economic loss payable, however it does depend upon a number of factors such as how much someone was earning and what they were capable of earning.