All about the WorkCover Worker’s Response Form 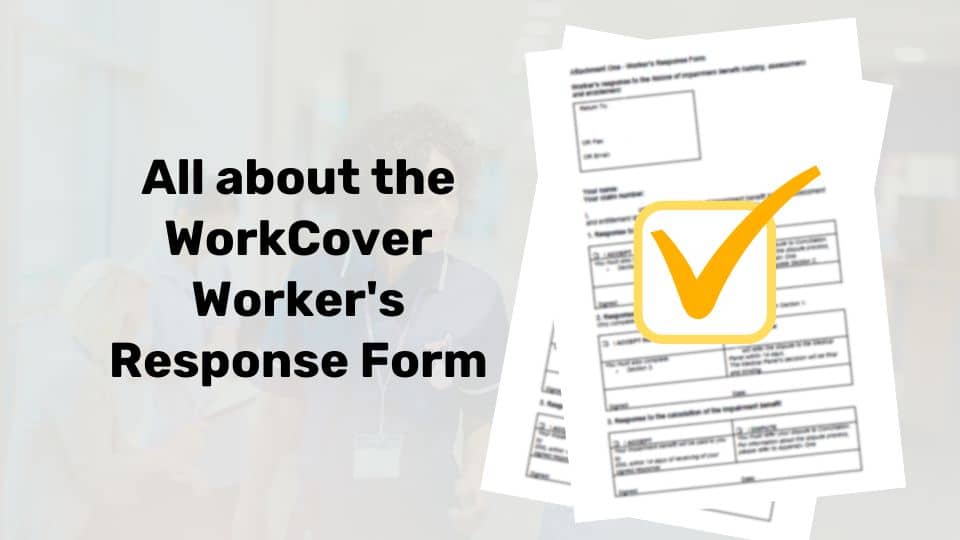 A worker’s response form is a single page form that the WorkCover Insurer will send to you if you pursue an impairment benefit lump sum claim.

The worker’s response form provides the insurer with your written instructions in relation to their offer/s.

You will receive a worker’s response form after you have seen the independent medical examiner/s for the first time.

If you appeal the IME opinion and proceed to the medical panel, once the panel has provided their opinion the insurer will send you a revised worker’s response form.

When will you receive a worker’s response form?

When you pursue an impairment benefit lump sum, the WorkCover insurer will organise at least one appointment for you to be assessed by an independent medical examiner.

After you attend the medical examiner they will provide a medical report to the insurance company.

Typically this takes anywhere from 2 to 4 weeks after the appointment.

The WorkCover insurer will then send you (and your lawyer if you have one) what’s called a notice of entitlement.

The notice of entitlement will outline a compensation offer to you which will be based on the report of the independent medical examiner (or examiners).

If you fail to reach the minimum threshold level of impairment, then the notice of entitlement will specify your offer as $0. Otherwise, it will list a whole person impairment rating and a corresponding compensation amount.

With the notice of entitlement will also be the worker’s response form.

Sections of the worker’s response form

There are a few key parts of the form that you should be aware of.

Response to the liability decision 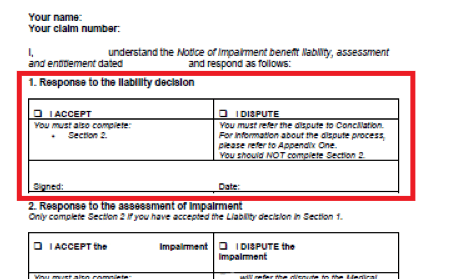 When you lodged your impairment claim, you may have lodged the claim for one injury or possible more than one injury.

After attending the independent medical examiner/s, in the notice of entitlement the insurer will have indicated what their opinion is in relation to liability.

That is, which injuries they have accepted as being assessable, and those injuries which they have rejected.

You would not be able to come back later and claim the back injury under the impairment claim once you have submitted the worker’s response form to the WorkCover insurer.

If the matter doesn’t resolve at conciliation then you could proceed to the medical panel to have that specific issue determined, or alternatively to the WorkCover Magistrates’ Court.

Response to the assessment of impairment This section specifically relates to the whole person impairment rating that the insurer is offering to resolve your matter for.

If the whole person impairment rating falls below the threshold level of impairment required to claim compensation under an impairment claim (either 5%, 10% or 30% depending upon the nature of your injury/injuries) and the insurer therefore is offering you $0 – if you disagree with that then your decision is a relatively easy one.

You would therefore indicate that you dispute the physical or psychiatric impairment.

Once you have done so, the insurer would refer the matter to the medical panel for determination. You would not need to do anything further to initiate the panel referral in addition to returning the worker’s response form to the insurer.

Alternatively, you could indicate on the form that you accept the physical or psychiatric assessment.

Here you would be indicated that if the insurer determined that you have a 10% whole person impairment rating, for example, you are agreeing to accept that.

Response to the calculation of the impairment benefit

If you indicated on the form that you dispute the physical or psychiatric impairment in the section above, you do not need to complete the response to the calculation of the impairment benefit section because the matter will be referred to the medical panel.

However, if you ticked that you accept the physical or psychiatric impairment, then you will need to complete this section.

You need to indicate whether you accept the calculation of the impairment benefit.

So whatever whole person impairment rating the insurer has offered to resolve your matter for and which you are willing to accept – that will match up to a corresponding dollar amount.

The calculation of the relevant impairment amount can be complex in some situations.

For example, the relevant amounts change from year to year, and will vary depending upon the date your injury happened.

There can also be multiple ways that a impairment amount can be calculated.

So using the example above – if you accept a 10% impairment, you will need check that the calculation of the compensation amount by the insurer is correct.

If you believe it is not and you indicate on the form that you dispute the calculation, then you will need to refer the matter to conciliation to have the matter discussed between the parties.

If you refer the impairment claim to the medical panel

If on the worker’s response form under the response to the assessment of impairment section you indicate that you dispute the physical or psychiatric impairment, then matter would be referred to the medical panel.

After you attend the medical panel, you’ll be provided with a new notice of entitlement which will include a new worker’s response form.

This offer will override any previous offer made to you by the insurer in relation to your impairment claim.

The new worker’s response form will look somewhat similar to the previous one, but there will be some differences.

Here’s how it will look (below): 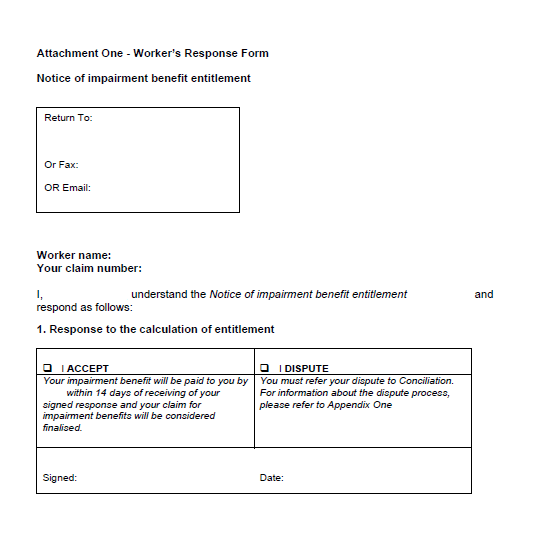 There will be no section for you to indicate whether you accept the liability decision of the insurer.

There will be a section for you to provide your response in relation to the calculation of entitlement and indicate whether you accept or reject the insurers calculation.

So if for example the medical panel determined that you have a 15% whole person impairment, the insurer will (if the claim is for a physical injury) have offered you a dollar amount and you’ll need to check that the amount has been calculated appropriately.

You can elect to dispute the calculation if you believe that it is incorrect and the matter would need be referred to conciliation.

If you fail to reach the threshold level of impairment necessary to be entitled to compensation under this claim, you can complete this form and return it to the insurer but you really do not need to (and in most instances our advice is to not do so).

How to return the worker’s response form

On the form you will see details instructing you where the form is to be sent.

It’s always a good idea to keep a copy of the form just in case.

If you have a lawyer, then they should send it back to the insurer on your behalf.

Impairment claims can be complex

The impairment process itself is relatively straightforward. You complete the claim form and send it off to the insurer with supporting medical material.

You then get medically assessed by an IME, and based on that assessment, the insurer will provide you with an offer to resolve your impairment claim in writing.

You can elect to accept or reject the offer. If you reject the offer then you need to proceed to the medical panel. After you’ve attended the panel, the insurer will send you a new offer in writing.

That being said, while the process can be straightforward, there are certain parts of an impairment claim that can be complex and involve:

The worker’s response form is a single page form that provides your written instructions to the WorkCover insurer in relation to an offer they have made to resolve your impairment claim.

There are two instances where you will receive a worker’s response form.

The first is after you have been assessed by the independent medical examiner/s for the purposes of your impairment claim.