What is WorkCover leave? 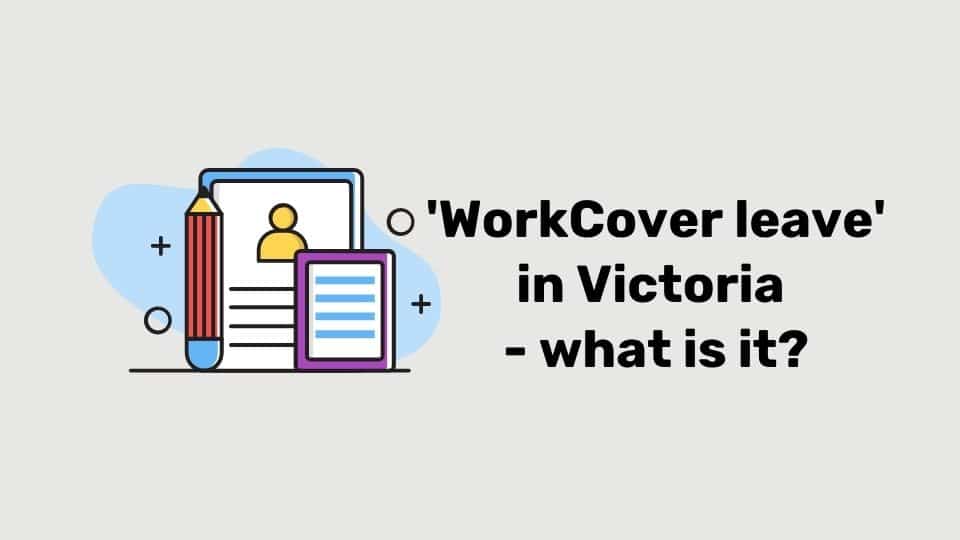 In Victoria, technically there is nothing called ‘WorkCover leave’.

If you are absent from work either on a partial basis or a complete basis because of your work-related injury and you have a WorkCover claim on foot, any time off work is typically referred to by those who regularly deal with the WorkCover system as being off on WorkCover payments.

The rest of this page will explore the topic further.

Your employer may refer to WorkCover leave

Typically, it is employers that will use the term WorkCover leave.

You may have heard them reference the term in conversation with you or other employees when someone is off work because of a work-related injury.

Or, if you have a roster at work, you may have noticed they have listed either you or other workers as being off on WorkCover leave.

However, you will not hear, generally speaking, a WorkCover lawyer or the WorkCover insurer or anyone else that has a lot to do with the WorkCover system make reference to a person being off on ‘WorkCover leave’.

How does being off on WorkCover payments work?

Now that we’ve clarified the use of the term WorkCover leave and how it is not a term typically used by those who are familiar with WorkCover, let’s dive into how being off on WorkCover payments works.

You can read about weekly payments in detail here.

Taking you all the way back to the beginning, in order to go off on WorkCover and be paid weekly payments, you need to have lodged and had accepted a WorkCover claim.

Some people mistakenly believe they have lodged a WorkCover claim when they haven’t.

Some people may believe that this is how you initiate a WorkCover claim.

Once the claim has been lodged, you will then be assessed by an independent medical examiner.

The WorkCover insurer will then determine your claim.

They will either accept or reject it.

Once your claim has been accepted, and assuming that you have had your claim accepted for medical and like expenses and weekly payments, you should be able to claim weekly payments if your ability to work has been impacted either on a partial basis or a total basis as a result of your work-related injury.

You will need to obtain certificates of capacity from your doctor or other health practitioner.

Certificates of capacity will provide comment on your capacity to work.

You can read about certificates of capacity here.

While you are off work, you’ll then be paid weekly payments.

It is important to keep in mind that you will not be paid at 100% of your pre-injury wage in most cases.

In most cases you’ll be paid at 95% of the average of what you earned over the 12-month period before you were injured for the first 13 weeks, and at 80% after that.

In a very limited number of circumstances, people are able have their payments topped up to 100%.

It’s worth pointing out that in most cases a person will be entitled to 130 weeks of weekly payments once they have an excepted WorkCover claim.

People can obtain payments in addition to 130 weeks if they can show that they have no work capacity which is likely to continue indefinitely.

‘WorkCover leave’ without a WorkCover claim?

You might be wondering whether it is possible to go on WorkCover or take ‘WorkCover leave’ if you do not have a WorkCover claim.

The short answer is that no, in order to claim weekly payments from the WorkCover insurer, you need to have an accepted WorkCover claim and have certificates of capacity certifying that you have an incapacity for work.

In some instances, what an employer will do is they will pay for an employee to have time off work and may also pay for some medical expenses if a person has a work-related injury and they have not lodged a WorkCover claim.

If you do not have a WorkCover claim and you go off work because of an injury, you may actually be using your own employment entitlements (sick leave, annual leave or long service leave).

This is the case even if the leave you’re taking is referred to as WorkCover leave by your employer.

Technically speaking, there is no such thing as WorkCover leave in Victoria.

People that are familiar with the WorkCover system and who deal with it on a regular basis do not refer to WorkCover leave.

Typically, those that refer to WorkCover leave are employers.

What they are referring to in most cases is that a person is off work because of a work-related injury and that they are receiving WorkCover weekly payments.

If a person is off work following a work-related injury without having an accepted WorkCover claim, it is possible that employers will in some instances pay for this time off themselves and still refer to this time off as WorkCover leave.