Can I claim workers compensation after termination? 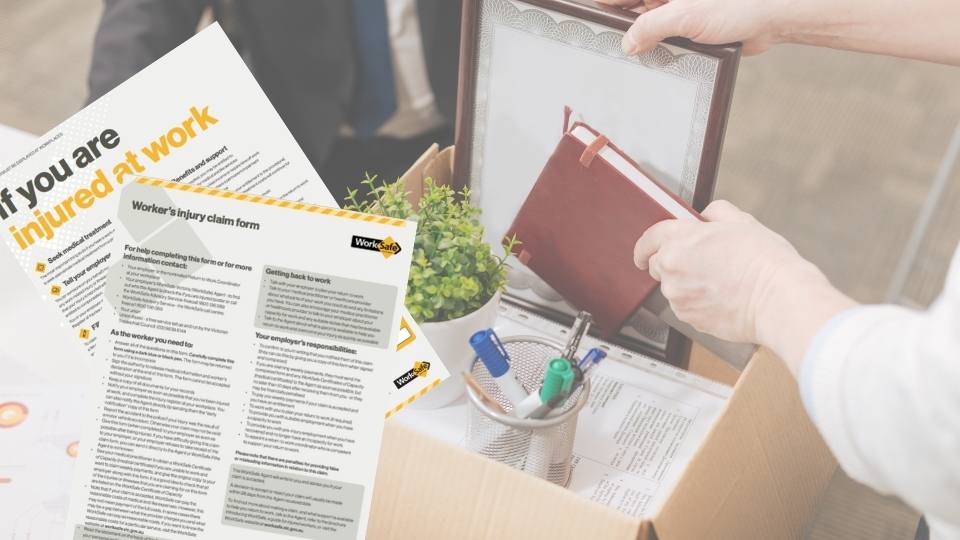 Yes, you are able to claim workers compensation after termination. Whether the claim is accepted or not will depend upon what evidence exists to support your claim that you suffered an injury or illness connected to your employment.

Sometimes, people that are injured at work do not want to lodge a workers comp claim (WorkCover claim) whilst they’re still employed by a particular employer.

This is understandable. They’re happy with their job and I don’t want to jeopardise it. Sometimes lodging a WorkCover claim can be frowned upon by an employer, even though that’s the very reason a business has WorkCover insurance.

Anyway, sometimes employees get terminated and it’s at this point they wonder whether they should lodge the workers comp claim that they’ve been holding off on.

Can I lodge a WorkCover claim after I have been terminated from my employment?

For example, you could suffer an injury and then be terminated two years down the track and then lodge a WorkCover claim at that point and it could be accepted.

This could be the case even if the injury was not reported to your employer after it happened.

The key thing is evidence. What evidence is there to show that you suffered an injury at work in the way that you say it happened.

For example, have you been to a doctor or a physio or another health practitioner?

Have you been to the hospital about your injury?

Did you mention your injury to any work colleagues, both past or present?

Obviously reporting the injury to your employer as soon as possible after it occurs will assist in having a WorkCover claim accepted down the track but it is not the be all and end all.

The bottom line is you need to be able to prove that you suffered the injury in the way that you say it happened and the evidence is the key to proving this.

Is my claim likely to be accepted initially?

Obviously, if you waited until you were terminated to lodge a workers compensation claim, your claim will likely be looked at and scrutinised to see whether you are lodging the claim because you want to get back at your employer.

Again, the bottom line is what evidence exists to prove that you suffered an injury in the way that you say it happened.

Whether a claim is likely to be accepted or rejected initially really depends upon the evidence exists.

However, the longer that you wait before lodging your claim, generally speaking the more likely it is that your claim will be rejected at first instance but keep in mind this isn’t always the case.

Your claim is more likely to be accepted if you have a reason for the delay in lodging the claim.

For example, if you have an injury of some sort that you thought would get better but realised that over time it was not likely to get better and so you lodged a WorkCover claim.

How to lodge a workers compensation claim post termination 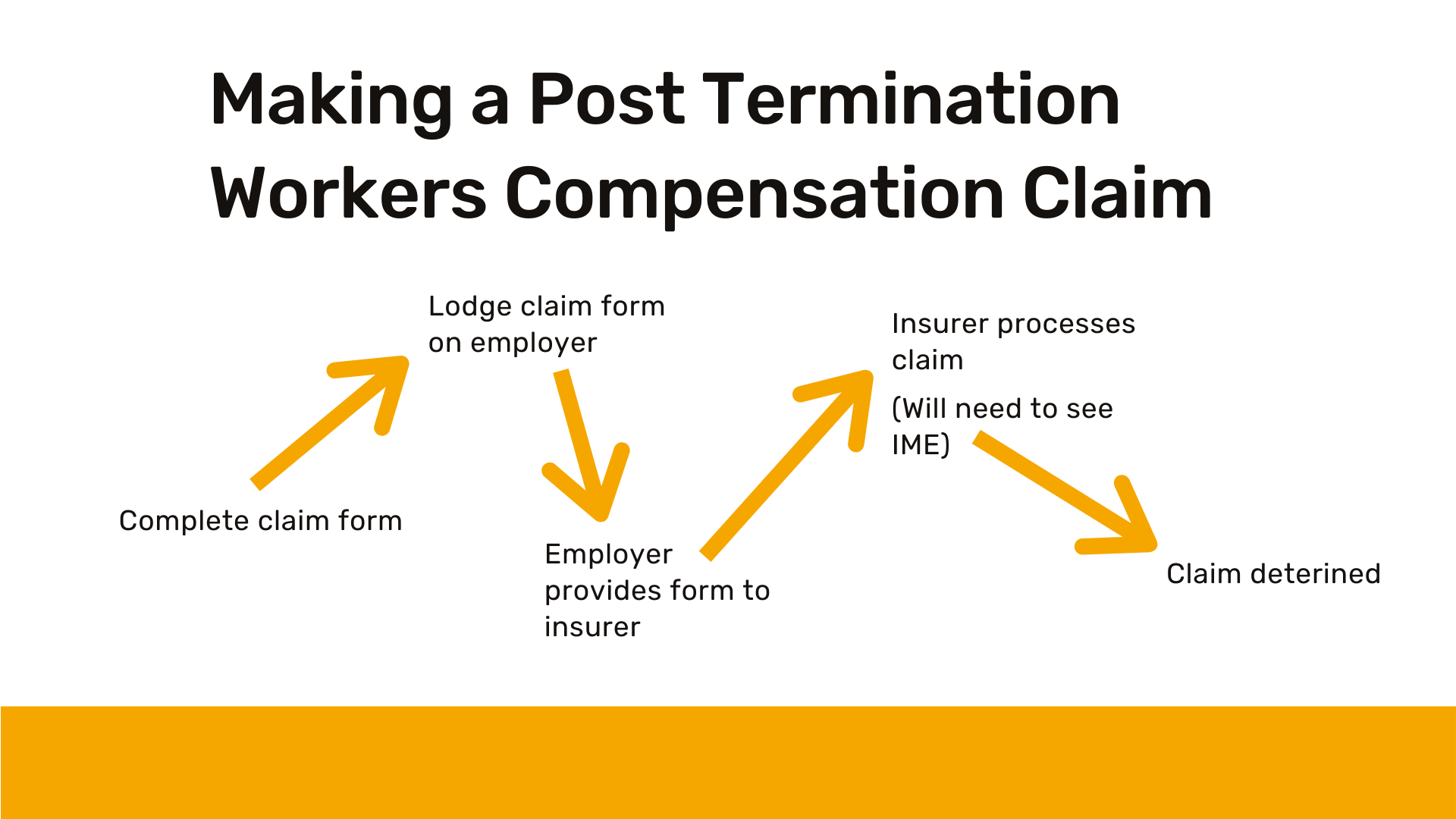 You need to complete a copy of the WorkCover claim form.

Read it carefully before you complete it.

List your injury and how it happened. You do not need to go into too much detail or try to over explain things as you will have the opportunity to do so down the track.

If there were any witnesses that witnessed you suffering the injury or the aftermath of it you should note their details on the form. This includes anyone that you told about the injury and that you think may assist your claim.

If you have a lawyer, they should handle the service of the claim form on your behalf so you won’t have to worry about it.

If you lodge the claim yourself, keep in mind that if you serve it on your ex employer, they have an obligation to forward it on to their WorkCover Insurer in a timely manner. The WorkCover insurer then has 28 days to determine the claim.

Depending upon the nature of the claim they will organise an appointment for you to be assessed by Independent medical examiner and also potentially they will engage a circumstance investigation report.

A circumstance investigation report basically involves a person speaking to your ex colleagues and perhaps your boss and yourself and then producing a report on the facts of the case.

Once the insurance company has determined the claim they will send you correspondence with their decision.

If my claim is rejected what do I do?

If your WorkCover claim is rejected, then should you still wish to pursue it the first port of call is to lodge a request for conciliation form.

This will initiate the conciliation process.

Conciliation is all about trying to resolve the matter. Parties involved will argue their respective sides and if agreement can be reached then the matter will resolve.

If the matter does not resolve at conciliation, then you can pursue the matter further either to whats called the medical panel or to the Magistrates Court.

The medical panel involves being assessed by a panel of doctors at the one time who make a decision in relation to the matter. The decision is final and binding.

The Magistrates Court involves pursuing your matter to court. It doesn’t necessarily mean that it will be heard in front of a magistrate and in fact most cases that proceed to the Magistrates Court resolve by way of negotiation between the parties without ever having to run before a Magistrate in a formal court hearing.

Whether your matter goes to the medical panel or Magistrates Court can depend upon the nature of the dispute. For example, let’s say that your WorkCover claim was rejected because the insurer does not accept that you suffered an injury in the circumstances in which you say you did.

In that case, because there is a factual dispute, the matter cannot go to the medical panel and must instead proceed to the Magistrates Court for determination.

Is there a time limit in which I can bring a claim after being terminated?

The longer that you wait to lodge a claim the harder it will be to get the claim accepted, generally speaking.

And the more likely you are to end up at conciliation or at the medical panel or Magistrates court to try and get your claim accepted.

If you wish to bring a lump sum claim, you need to keep in mind that you have six years from the date of injury in which to bring the claim.

There are exceptions to this, but you should consider that six years from the date of injury is all you have to bring a claim.

You can read more about time limits when lodging a claim here, and how long a claim can usually take, here.

The answer as to whether you can lodge a workers compensation claim after being terminated is a pretty straightforward one – yes.

Whether it will be accepted or not is a different issue. That will depend upon the merits of the matter.

What evidence is there to prove that you suffered an injury at work or an injury that was contributed to by your work, in the way that you say it happened? It’s all about the evidence.