How long does a WorkCover claim take? In order to answer this question properly, we need to look at the different parts that make up a WorkCover claim.

The first thing we need to look at is how long it takes for a WorkCover claim to be processed after it has been lodged.

How long does WorkCover have to accept a claim?

If you want to read about how long you have to lodge a claim, you can visit this page.

Once you’ve completed the claim form, you need to provide a copy of it to your employer.

They then need to complete their own section on the claim form.

This should be done pretty quickly by your employer.

The law says they’ve got 10 days to lodge the claim form once they receive it. It is then sent off to the WorkCover Insurer by them.

The WorkCover insurer then has to process the claim and make a decision as to whether to accept it or reject it.

During that 28 days they will arrange for you to be assessed by an independent medical examiner – who you will see during this 28 day period.

In some cases they will also organise a circumstance investigation report to be completed.

This involves a circumstance investigator taking statements from the people that may be able to shed light on how the injury happened. This will also happen during the 28 days.

If your claim is accepted, then you should hear within the 28 day time period.

If the insurer does not get back to you within this time frame, in some cases your claim can be automatically accepted.

For this reason it’s important to keep an eye on the time. If the insurer does not accept your claim, if you wish to pursue it further, your next step would be to go to conciliation.

Conciliation is a process where the matter is negotiated between the parties in an informal setting.

Typically, if your claim was rejected and then proceeds to conciliation, it can take a month or so before it goes to conciliation just because of the backlog of cases that the Accident Compensation Conciliation Service needs to deal with.

If the matter doesn’t resolve it conciliation then you’ve got two basic options.

The first is to proceed to the medical panel which is where you get assessed by a panel of doctors.

If you would like to proceed to the medical panel it can take another couple of months from when you lodge the claim before you receive notice as to their opinion.

The second option in addition to the medical panel is to proceed to the Magistrates Court. It can take six or so months before your matter reaches court and resolves one way or the other.

This is a lump sum claim for permanent impairment.

Anyone that injured in Victoria at work is entitled to pursue an impairment benefit.

In terms of timeframes for this claim, generally speaking it usually resolves somewhere between three to four months from when the claim was lodged. 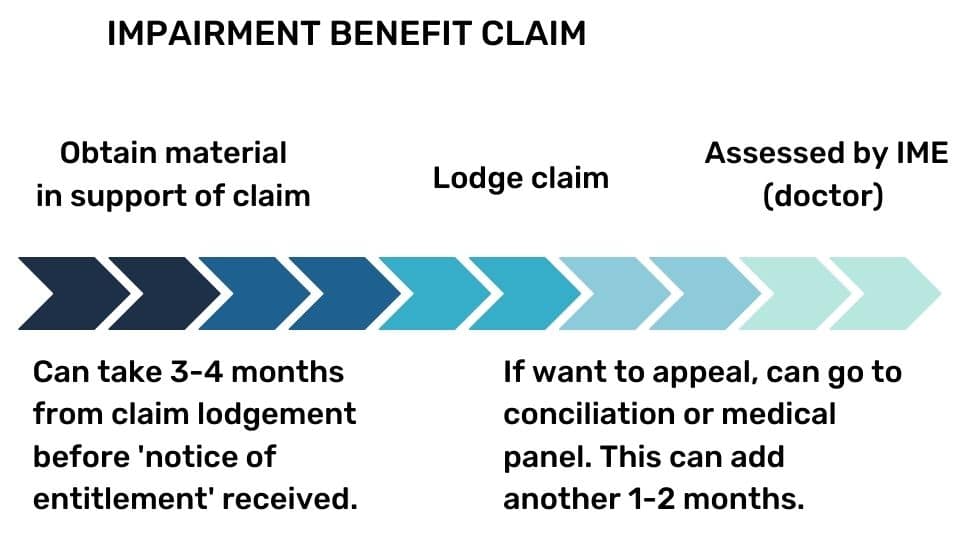 If you dispute the decision of the independent medical examiner and wish to go to the medical panel, then that can push things out closer to the four month mark, sometimes beyond.

Once the impairment claim has resolved, either following the independent medical examiner appointment, or the medical panel appointment, the settlement monies are generally paid to you within two to three weeks from when you sign what’s called the workers response form.

The workers response form is a basic form that says that you accept the offer the insurance company has made to you.

In terms of how long a common law claim will go for, that really depends upon how contested the matter is.

A serious injury application includes material in support of your case. From the time that this is lodged, the Victorian WorkCover authority via their lawyers have 120 days to make a decision.

The decision is whether to grant you a serious injury certificate or not. This decision can come early on during the 120 days, or it can come very late and close to the 120 day mark. There, many matters will resolve.

If your matter resolves at the settlement conference, then you will be paid any settlement compensation amount generally speaking within the next 4 to 6 weeks following settlement.

If however you do not obtain a serious injury certificate during the 120 day period, then you must initiate court proceedings to proceed to the County Court.

At the County Court it will then become the role of a judge to determine whether you have a serious injury or not.

It can take up to 6 months – sometimes less sometimes more – before your matter gets to court.

Also keep in mind however that any time prior to court, whether it be a month out from court or four months out from court, your matter can resolve by way of negotiation between the parties.

By resolve we mean that you are provided with a serious injury certificate or settles for a monetary amount.

If the matter still does not resolve, if you still wish to pursue the matter you need to issue what’s called a writ. This initiates court proceedings in either the County Court or the Supreme Court.

Your matter can then take six months, sometimes more, to reach court. Again, keep in mind that any time prior to the six month (or so) period, the matter can resolve by way of negotiations between the parties.

Prior to any court hearing, your matter will be the subject of a mediation. This will involve you and your representatives, the lawyers that are acting on the other side, and an independent mediator that attempts to help the matter to resolve.

If the matter then doesn’t resolve it is heard before the court by either a judge alone or a judge and jury.

Some cases can run for a very short period of time, say a day or so, whereas a small number of cases can take weeks.

At the end of the court hearing a decision can be made straight away, or it can take several weeks or months.

So, as you can see from above, the question as to how long a WorkCover claim takes is not a simple one and depends upon what you’re actually pursuing and how contested the particular claim is.

The less that the other side contest your matter, whether it be your initial claim or a common law claim, the quicker your matter is likely to resolve.