When is a WorkCover injury stable in Victoria? 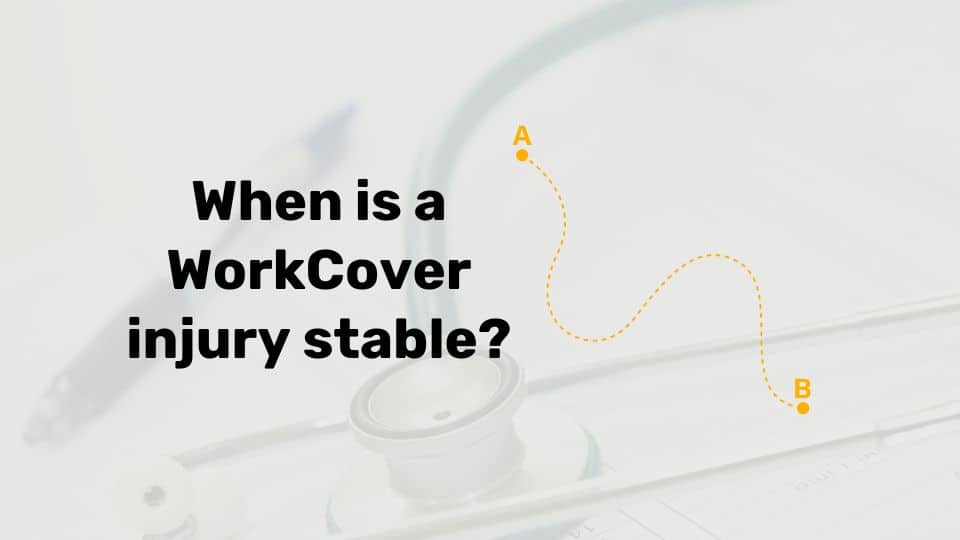 WorkCover insurers will in most cases not consider an injury stable until at least twelve months have passed from when the injury occurred.

What is a stable injury?

When it comes to WorkCover claims, an injury can be considered stable when it is not likely to change, either by way of improving or getting worse, to any significant extent.

This depends upon the nature of the injury.

Some injuries will reach the point of stability quicker than others.

If you suffered an amputation injury to a finger, it may be determined by your doctor that the injury has stabilised after a period of six months.

If you suffered a shoulder injury, a doctor may determine that your injury will be stable after twelve months.

If you have a psychological injury, your doctor may determine that that condition is likely to be stabilised after approximately two years.

The above examples are just that – examples.

Each injury is unique, and your specific injury may take longer or shorter to stabilise.

Why is stability important for WorkCover injuries?

When it comes to the stability of an injury, it is relevant in relation to two aspects of a WorkCover claim.

You do not need an injury to be stabilised in order to initiate and have accepted a WorkCover claim.

This means that you are able to claim weekly payments and medical and like expenses regardless as to whether your injury has stabilised or not.

This is very important point and one that you should keep in mind if you have an injury for which you have not put a claim in for.

When it comes to claiming an impairment benefit lump sum or a common law lump sum, stability is very important.

Under these claims, what you are being compensated for is permanent impairment – the impact that the injury has on you once it has stabilised.

In relation to an impairment benefit claim, how you were up until the point of stabilisation is, for the most part, not relevant to the claim.

Say that you suffered an injury and that if you were to rate the injury in terms of the impact on your life in the weeks and months immediately after the injury occurred – you would rate it at perhaps an 8 out of 10 (with 10 being maximum possible impact).

However, after a period of time and once your injury has stabilised, the impact drops down to a 5 out of 10.

It’s how you are at this 5 out of 10 point and beyond that is relevant when it comes to impairment claims and common law claims.

With an impairment claim, occasionally what happens is that the insurer will have you medically assessed by an IME who opines that your injury is not stable.

If this occurs, the IME will provide a report that says why he or she believes your injury is not stable, and they will indicate in that report when your injury is likely to be stabilised.

They’ll typically suggest in the report that you should be reassessed again after this point.

The insurer will then typically put your impairment claim on hold until such time passes.

They’ll then organise another appointment for you to see the IME again.

This can significantly delay impairment claims.

If you disagree with the opinion of the IME and believe that your injury is stable – and if you have the support of your treating doctor – you are able to contest the IME opinion.

In order to do so, you’ll need to complete a request for conciliation form which will initiate the conciliation process.

We’ve written about what happens at conciliation which you should read if you are not sure about the process.

If you pursue a conciliation relating to injury stability, you should have medical material addressing the issue of stability.

If you do not have medical material indicating that your injury is stable then the WorkCover insurer is not likely to reconsider their decision to suspend your claim.

If you successfully challenge the IME opinion via the conciliation process, then the insurer will usually organise for you to see a different IME for you to undergo another impairment assessment.

Sometimes what might happen is that the insurer will write to the IME you originally saw and ask them to provide an impairment assessment.

Common law claims, just like an impairment claim, require an injury to have stabilised before a person can pursue the claim.

If you have successfully concluded an impairment claim then in most cases your injury will be considered to be stable and the common law claim can then be initiated.

However, your injury which might have been stable may change to not be stable if you intend to undergo medical treatment which may significantly alter the nature of the injury (eg: surgery).

More on this in the section below.

Medical treatment may impact whether an injury is stable

An injury may be stable but then may cease to be stable because a person may intend to undergo medical treatment which may significantly alter the nature of the injury.

An example of this is if a person has a shoulder injury and the doctor that is treating them refers them off to a specialist.

How long it takes for an injury to stabilise after surgery depends upon the nature of the surgery and how quickly a person recovers.

If you have a minor surgery, then your injury might be considered to be stable after a few months, for example.

But if you have a significant operation then it could take 12 months or more for the injury to stabilise after surgery.

Also, if you have an injury that has stabilised but there is the possibility that you may need surgery, as confirmed by your doctor, and you may undergo the surgery at some point in the near future, then your injury likely cannot be considered to be stable.

For example, let’s say that for the treatment of your injury you get referred to a specialist and the specialist flags the possibility of you needing surgery but he wishes you to first under a period of conservative treatment – which will take about six months – before deciding whether to perform the surgery.

During the six month period, even though no surgery has been definitively set down, your injury cannot be considered to be stable.

An injury is considered to be stable when it’s not getting any better and not getting any worse to any significant extent. It has for the most part plateaued in terms of recovery.

Generally speaking, an injury will not be considered to be stable by a WorkCover insurer until at least 12 months have passed at a minimum since the date of injury.

Stability of an injury is relevant when it comes to claiming an impairment benefit lump sum as well as a common law lump sum. The reason for this is that under these two claims what you are being compensated for is your permanent impairment.