Is WorkCover a salary? (Vic) 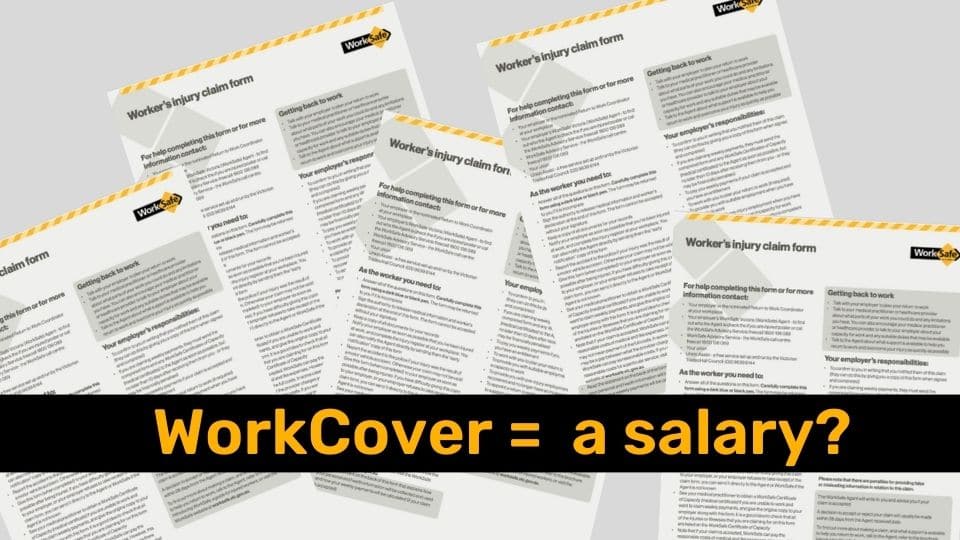 In one sense, WorkCover is a salary.

If you have an accepted WorkCover claim in Victoria, one of your potential entitlements is the payment of weekly payments to cover some of your lost wages.

However, it is important to keep in mind that WorkCover is broader than simply a weekly payment. It can assist injured people in different ways.

Regular payments if your ability to work is impacted

If you have an accepted WorkCover claim for medical expenses and weekly payments, then you may be entitled to claim the payment of a salary in the form of regular payments if your ability to work is impacted.

So if as a consequence of the work related injury your ability to work is either partially impacted or completely impacted and you can’t work at all, and if this is supported by medical evidence specifically in the form of a certificate of capacity, then you should be paid weekly payments.

In a nutshell however, here’s how your replacement salary/weekly payments will be calculated.

Weekly payments are paid at the rate of 95% of your pre-injury average weekly earnings (an average of 12 months of earnings earnings for the injury or if you haven’t worked for an employee 12 months, the average of the period that you have worked).

Generally speaking a person is entitled to 130 weeks of salary replacement.

You’re able to be paid salary replacement in addition to 130 weeks if you have no work capacity and this is likely to continue into the future.

It’s important to note that if the work that you were doing prior to the injury involved over time and or shift allowance then these are included for the first 52 weeks.

The other thing to keep in mind is just like a normal salary, your annual leave, sick leave and long service leave entitlements continue to accrue as they were doing when you were working. You can read more about that here.

So as you can see WorkCover is in one sense a salary.

It’s just that it won’t in most cases replace all of your lost wage. There will most times be a gap between your pre injury wage and what WorkCover will pay you.

In limited cases, you may be entitled to top up pay (payment on top of your WorkCover payment to 100% of your pre injury wage).

You can read about that here.

In addition to a salary, there are other entitlements

Once you have an accepted WorkCover claim, you’re also able to claim the reasonable costs of medical treatment related to your work related injury.

So if you need GP visits, medication, physio, and even surgery the WorkCover insurer can pay for this treatment.

There’s also two potential lump sum claims payable, the first being an impairment benefit and the second being a common law claim for damages.

It’s worth mentioning in relation to a common law claim for damages, part of what you can be compensated for in some cases is loss of earnings.

So if you’ve lost income in the past as a consequence of the injury, then this loss can form part of a common law claim.

Also, as a consequence of an injury you are likely to be restricted moving forward in terms of the work that you can do and if there is a difference between what you would’ve earned pre-injury compared to what you can likely earn now, then this can also be taken into account.

One aspect of WorkCover in Victoria is the payment of a salary if your ability to work has been impacted by your work related injury, illness or condition.

WorkCover will however not compensate you 100% for lost wages and the period during which WorkCover will pay a salary to you is capped.

Also, the salary component of WorkCover is just one part of the WorkCover scheme. There are further entitlements that you may be able to claim in the form of medical expenses and two potential lump sum claims.