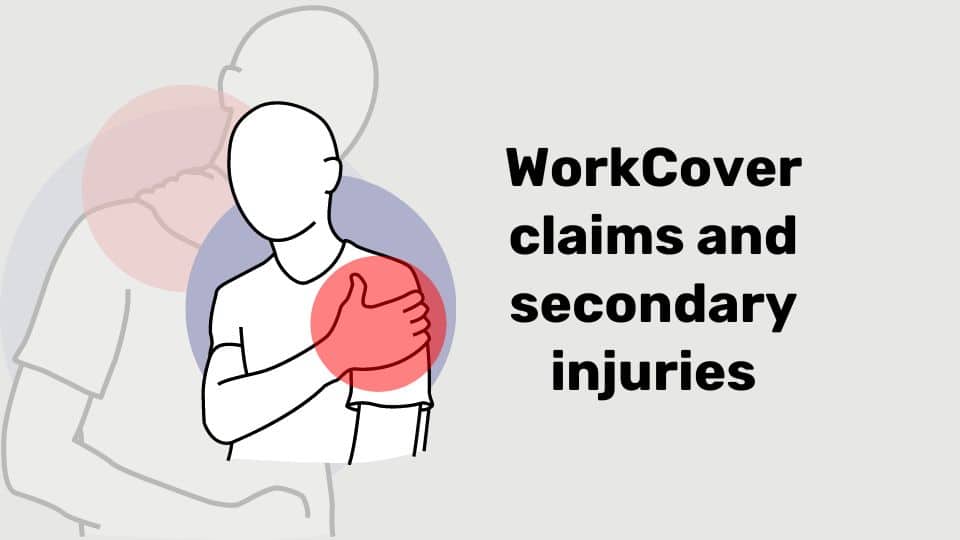 A WorkCover “secondary injury” is one that is caused by the “primary injury” for which there is an accepted claim by the WorkCover insurer.

What your entitlements are in relation to a secondary injury however can be complex.

The rest of this page will explore the topic further.

What is considered a secondary injury for the purposes of WorkCover in Victoria?

There is no legal definition in the legislation on what a secondary or primary injury is.

Any injury that is related to the primary injury can potentially be considered as a secondary injury.

Whether that injury will be accepted by WorkCover however is a different matter.

Here are some examples as to what may be considered to be a secondary injury under WorkCover:

Keep in mind however that even though two injuries might be accepted by WorkCover as secondary injuries, the entitlements relating to those injuries may differ.

A person suffers injury to their back during the course of their employment.

As a consequence of altered gait (impact on a person’s walking), that person develops hip problems for which they require ongoing treatment.

A person suffers injury to their left shoulder to the extent that they are no longer able to use the shoulder for anything more than lifting light objects.

As a consequence of having to rely on their right shoulder more, it develops a tear.

A person suffers a physical injury and secondary psychological injury.

As a consequence of the physical injury, and the impact and restrictions caused by the injury, that person develops depression for which they require treatment.

A person suffers a physical injury relating to their employment.

For treatment of that injury, they require surgery. During the surgery, the surgeon cuts a nerve and the person is left with permanent numbness in a limb.

Lets say, for example, that you suffer injury to your right shoulder at work and that you have an accepted WorkCover claim relating to that shoulder injury.

In this instance, because your WorkCover claim is accepted only for the initial right shoulder injury, there may be some resistance from the WorkCover insurer if you were to try and get medical expenses paid that relate to the secondary left shoulder injury.

What you would require in this instance in order to have the insurer accept the injury and pay for medical treatment costs, is medical material connecting the secondary shoulder injury to the initial shoulder injury.

This means medical material from your GP, specialist or other health practitioner such as a physiotherapist.

However, even with supportive medical material, the insurer may still reject your request to have the medical treatment paid for.

They may, in some instances, arrange an appointment for you to attend an independent medical examiner for an assessment and comment in relation to the secondary shoulder injury.

What to do if secondary injury is rejected by the insurer

When it comes to conciliating these types of matters, generally speaking there are four ways that the conciliation can go:

The first way is that the insurer withdraws their decision and accepts the new injury.

Generally speaking, this is the option least likely to occur. It may occur if the insurer is provided with further supportive medical material that they did not have when they made their initial decision to reject the secondary injury.

The second way is that the insurer does not withdraw their notice, but they make you an offer to resolve the matter.

So for example, if you’re trying to get ongoing medical expenses paid for relating to a secondary shoulder injury, the insurer might offer to pay for a limited number of medical treatments – say for 4 months – with no treatment to be paid for after that time.

You need to be careful about accepting an offer like this at conciliation particularly if you are not sure of the long-term medical prognosis relating to an injury.

For example, if you were to accept an offer like this and you needed surgery down the track on your  secondary shoulder injury, then the insurer would not be likely to cover the cost of this.

Another possibility is that the conciliation is adjourned.

Or to use terminology of the Accident Compensation Conciliation service – a progress certificate is issued.

This may occur if further medical material is required to clarify things.

The fourth possibility is that Insurer does not withdraw their notice and do not make any offers.

For this reason we recommend that if you have a conciliation relating to a matter like this that you (or your representative – your lawyer or WorkCover Assist etc) should contact the WorkCover insurer and to have a chat with the person who is handling the conciliation before hand just to ensure that when you get to conciliation it isn’t a waste of time.

For a matter like this that does not resolve at the conciliation stage then you can elect to proceed to the Medical Panel or to the WorkCover Magistrates court.

Some secondary injuries are compensable under impairment claims:

Let’s say that you have a physical injury that has required ongoing treatment. Part of that treatment has been the regular intake of pain killing medication.

As a consequence of having to take pain killing medication for a lengthy period of time, you have developed stomach and bowel problems.

For the purposes of an impairment claim, these further issues can be included as injuries, and these can form part of your claim in addition to your primary injury.

What can be included isn’t always clear cut however.

Let’s say that you have a back problem and because of nerve impingement in your spine you get referred pain that goes down your leg and into one of your feet.

In this instance, although on one view this might seem like a different injury, for the purposes of a WorkCover impairment claim it would not be classed as being a separate injury.

The secondary injury needs to be a discrete injury.

In the example above however, the consequences that flow from the back injury would be considered as part of the assessment of the primary physical injury which produces those symptoms.

Another common scenario for people that have suffered physical injuries is that due to their ongoing pain and restrictions they develop psychological symptoms – eg: depression.

(Copyright notice: this is original content from the Work Injury Site)

Secondary psychological injury does fall within the definition of an injury and would be assessed as a discrete injury over and above your primary physical injury.

However, despite this, and the fact that the insurer would have you assessed by a psychiatrist, secondary psychological injuries can be assessed, but any impairment rating won’t form part of your overall whole person impairment rating under an impairment claim.

This is unfair as many people do have psychological symptoms following a physical injury.

If you have a secondary injury that you believe relates to an injury for which the WorkCover insurer has accepted liability for and you wish to pursue an impairment lump sum claim, we would recommend that if you are thinking of pursuing the claim yourself that you should at least seek the advice of a lawyer prior to lodging the impairment claim.

When it comes to WorkCover Common law claims, secondary injuries are compensable.

However, the process can be complicated and confusing for many people.

Generally speaking, here is how it works.

To claim a common law lump sum, the first thing that must be done is that a serious injury application is made. The reason for this is the claimant must obtain a serious injury certificate to be able to sue for damages.

Here’s an example to better explain this.

Lets say that a person has a back injury and shoulder injury suffered in the same incident at work, and that as a consequence of the back injury they developed hip problems.

Or, the same application could be made that both the back injury and the shoulder injury and hip injury (considered in isolation of one another) are serious injuries.

Once a person has obtained a serious injury certificate, then when it comes to obtaining compensation under a common law claim a person is able to be compensated for any consequential injuries.

So using the example above, if the person obtained a serious injury certificate relating to the back, then when it comes to determining any compensation payable, the hip injury would factor into those calculations because it is secondary to the back injury.

This serious injury process and requirement can cause a significant amount of confusion for people that are going through the common law process.

Many wonder why certain injuries are not getting the same attention as what other injuries are.

The above may well be the reason for that in many instances.

However, what constitutes a compensable secondary injury under the Victorian WorkCover system can be complex.