How are impairment benefits paid? 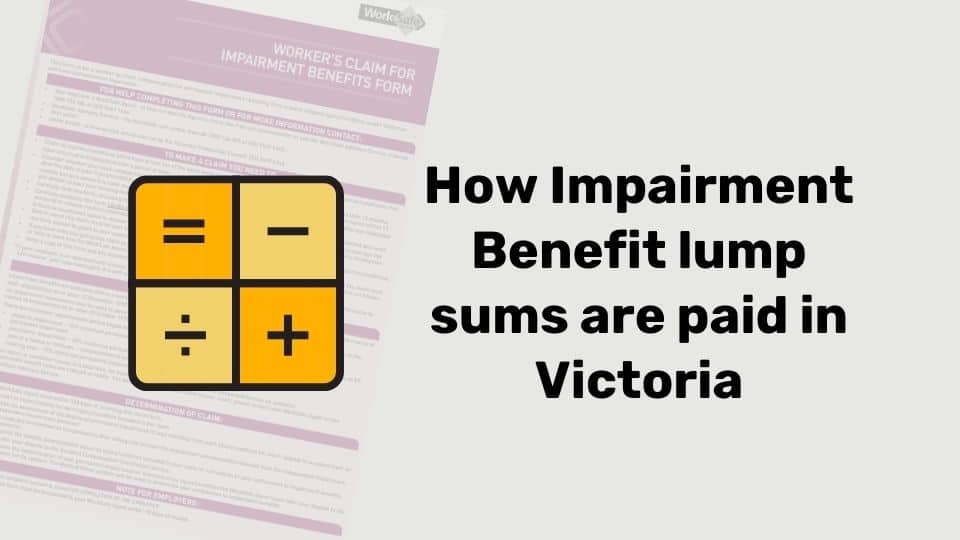 Injuries are assessed in accordance with the American Medical Association Guides to the Evaluation of Permanent Impairment, fourth edition.

Or, if the injury is psychological/psychiatric in nature, in accordance with the Guide for the Evaluation of Psychiatric Impairment for Clinicians.

What is an impairment benefit?

An impairment benefit is a lump sum claim that a person can potentially claim under the Victorian WorkCover scheme.

It is a claim that a person can pursue once their injury (or more specially, all of the injuries they wish to make a claim form) has stabilised.

If future treatment is planned that may change the nature of an injury (eg: surgery), then the injury would not be considered stable.

Generally speaking, the WorkCover insurer will not organise for a person to have an injury medically assessed if less than twelve months has passed since the injury happened.

You can read about impairment benefits in detail here.

How are impairment benefits calculated?

Once an impairment benefit claim form has been lodged, the WorkCover insurer will organise an appointment for your injury to be medically assessed.

The doctors that assess you are called independent medical examiners.

They have undergone certain medical training that allows them to assess injuries in WorkCover related matters.

The assessor (or assessors) will determine your whole person impairment rating.

It is very important to keep in mind that your whole person impairment is not a percentage figure of your impairment out of 100.

Lets say that your whole person impairment rating has been determined at 10%.

It is simply a percentage figure given to your injury or injuries.

So if you have an injury it’s important not to be dismayed by the impairment rating because you think it’s an unfair assessment of your impairment out of 100%.

What happens once a whole person impairment rating has been determined?

Your overall whole person impairment rating will be matched up to a corresponding compensation amount.

There are specific tables that related to different categories of injuries and conditions.

You can view these on this page.

There will be some variation in the compensation amounts based on the year the impairment claim was lodged.

If the insurer has not accepted liability for all injuries

Sometimes what happens is that the insurer doesn’t accept liability for all injuries.

You may, for example, see an IME who determines that one of your injuries is not related to your employment.

If the insurer doesn’t accept accept liability for all of your injuries and you wish to contest this decision, then the first step is to appeal the matter to conciliation.

If you haven’t got a lawyer assisting you by this point, we’d recommend that you do so to give yourself the best chance of getting the injury accepted (or to provide you with advice not to pursue it because it is unlikely to be accepted).

If you’re not happy with the assessment of your whole person impairment rating completed at first instance by the doctor (or doctors) organised by the WorkCover insurer, then you can elect to proceed to the Medical Panel.

The role of the medical panel is to review the assessment (or assessments) previously completed and to make their own opinion as to your whole person impairment rating.

They may increase the assessment, decrease it or keep it the same.

The opinion of the medical panel is final and binding (although in a limited number of circumstances it can be appealed).

You will need to sign a worker’s response from

Once you have elected to resolve your impairment benefit claim, either after the assessment organised by the WorkCover Insurer or alternatively after attending the medical panel, in order to resolve the matter you will need to sign want what’s called the Workers Response Form. Once you have completed and signed the workers response form (or someone has done so on your behalf) it needs to be sent to the insurer.

Once they’ve received the form, you’ll usually be paid the impairment settlement monies within a couple of weeks.

The money will be paid to you directly into your bank account, or alternatively you’ll be paid by cheque.

Impairment benefits are paid based on your whole person impairment rating.

Your whole person impairment rating is determined as a result of having your injuries assessed by appropriately trained doctors who grade each of the injuries.

If you disagree with the initial determination of your whole person impairment rating, you can proceed to the medical panel.

The panel will provide their own opinion as to your whole person impairment rating.

If the insurer initially does not accept all of the injuries you claimed, you can appeal that decision to conciliation.

To finalise an impairment claim, you will need to complete the Workers Response Form and send it to the insurer.

The impairment settlement amount will be paid to you usually within a couple of weeks after they have received the signed form.