When can you claim workers compensation in Victoria? 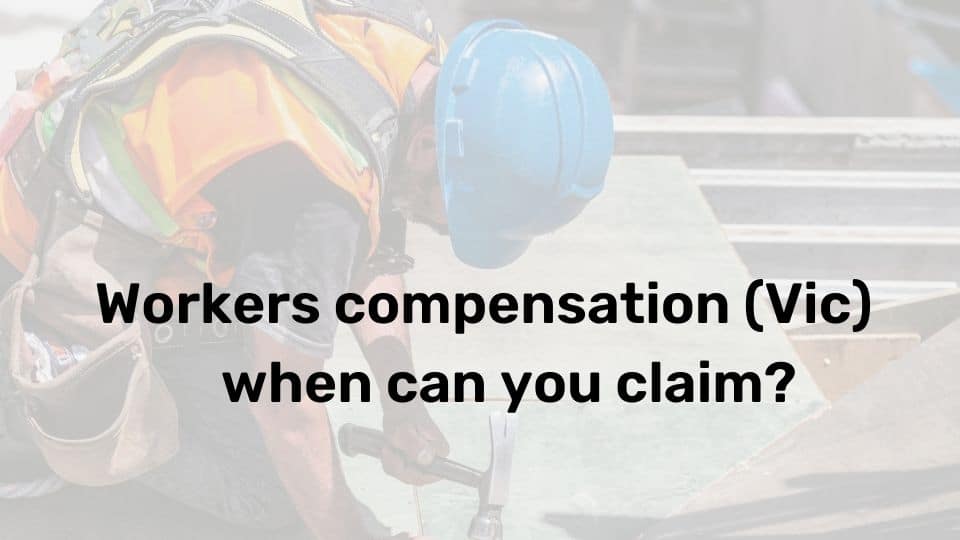 In general, you can claim workers compensation in Victoria when you suffer an injury, illness or condition that is connected to employment.

This page will explore things further.

In order to successfully have a workers compensation (WorkCover) claim accepted in Victoria, generally speaking you will need to satisfy the following criteria.

Firstly, you need to have an injury, whether it be a physical or mental injury.

The injury must be related to your employment.

What qualifies as a work related injury is wide ranging in Victoria.

An injury could, for example, be one that occurs in a single incident.

It could also be one that happens gradually over time, say over a number of years.

If you want to read more about what can be considered a work related injury, then you should visit this page, and this page if you want a copy of the claim form.

There has to be a connection to Victoria

Your employment must be connected to Victoria in some way.

Most people that are injured working in Victoria will satisfy this.

You can also satisfy the criteria if your employerss main place of business is located in Victoria.

Finally, you will need to be a ‘worker’

You need to be considered a workout under the act.

Again most people that are injured while working will satisfy this.

The above criteria are what you will need to satisfy in order to claim workers compensation in Victoria.

What does it mean to ‘claim workers compensation’?

By this I mean lodge and have accepted an initial workers compensation claim (WorkCover), which will entitle you to claim medical and like expenses and potentially weekly payments.

In order to claim anything more than this, that is, lump sum compensation, different criteria apply.

The remainder of this page will discuss circumstances in which you can claim workers compensation (where many people believe they are not entitled to do so).

If you want to know how to claim WorkCover, you can visit this page.

The injury happened a long time ago

Many people believe that if a significant amount of time has passed since they suffered an injury, perhaps months or years, that they are not able to pursue a claim.

This is not true.

There is no specific time frame in which you need to lodge a workers compensation claim in Victoria.

There are many claims that are lodged months or years after an injury occurs and accepted.

What you should do is report an injury to your employer within 30 days of it occurring or you become aware of it.

WorkCover law in Victoria says that if you don’t report an injury with in 30 days after becoming aware of it, you may not be entitled to compensation.

However, if you have a reason that you didn’t report the injury within 30 days, then this requirement can be waived.

You should read this page which goes into detail about how long you have to lodge a claim.

If you want to know how to report an injury that happened at work, then you should read this page.

Where nobody was at fault for the injury

Victoria has both a no fault and fault based workers compensation scheme.

This means that part of your entitlement is fault based (a common law claim).

That is, that you need to show that someone was a fault for the injury in order to claim.

Other entitlements are no fault based (medical and like expenses, weekly payments, impairment claim).

This means that you do not need to show that someone was at fault in order to claim.

So out of the four entitlements in Victoria under the WorkCover scheme, you only need to prove fault in order to claim for one of them.

And importantly, to lodge an initial claim and have it accepted, you do not need to show that someone else was at fault for the injury.

It is enough to simply show that you suffered an injury at work.

It is not relevant for the purposes of having an initial claim accepted whether someone else was at fault for the injury.

An injury does not need to be serious to claim

The term ‘serious injury’ is one you may hear if you have a workers compensation claim on foot in Victoria.

However, the term is only relevant in relation to a specific part of the WorkCover scheme.

When you are claiming common law damages, in addition to showing that someone was negligent and that their negligence contributed to your injury, you need to show that you have a serious injury.

If you do not have a serious injury, then you are not entitled to pursue a common law lump sum claim.

However, when it comes to making an initial claim for workers compensation, you do not need to have a serious injury.

All you need to have is an injury (or illness, or condition).

Whether the injury is a serious injury or not is irrelevant.

Even if you have an injury that persists only for a couple of weeks and resolves – if you satisfy the criteria referred to at the top of this page then you are entitled to pursue a workers compensation claim.

Although, if you have an injury that is likely to persist only for a couple of weeks, you need to think about whether you actually should lodge a claim. You can read more about that here.

You can claim if you have a pre existing injury

If you aggravate a pre existing injury as a result of your employment, you may be able to pursue a workers compensation claim.

The workers compensation law in Victoria allows people to lodge and have accepted a claim for an aggravation of a pre existing injury.

Generally speaking, what you need to show is it there is a difference between how your injury was before the aggravation and and how it is after it.

If there is no difference, then potentially your claim will not be accepted.

Similar to the above point, even if you’ve had a workers compensation claim relating to the same body part that you’re wanting to lodge a new claim for, you can still make a claim if your new injury is an aggravation.

The fact that you’ve had a previous claim relating to the same body part does not prevent you from pursuing a further workers compensation claim and getting a new set of rights and entitlements under a new claim.

The fact that you are no longer with the employer with which you suffered the injury does not prevent you from pursuing a claim.

Even though you may have suffered an injury with an employer in the state of Victoria, you do not need to continue to reside in Victoria to make a claim.

It may be inconvenient somewhat if you no longer live in Victoria at certain points during a workers compensation claim however.

For example, from time to time you may be asked by the WorkCover insurer to see a doctor of their choosing. Usually, these doctors are in Melbourne. It is uncommon for the insurer to organise appointments for people to see doctors in other states (however, occasionally it does happen).

Even if you don’t need time off work, you can still pursue a claim for workers compensation.

The workers compensation scheme in Victoria does compensate people if they are not able to work to the extent that they were able to prior to their injury.

However, it also pays the cost of medical expenses which includes surgery.

In order to claim workers compensation in Victoria, you need to satisfy the following criteria (generally speaking): that you have an injury related to your work, that there’s a connection to Victoria, and that you’re a ‘worker’ under the act.

To claim workers compensation, we’re referring to lodging and having accepted an initial WorkCover claim which entitles you to claim medical and like expenses, and potentially weekly payments.

In order to claim an impairment benefit lump sum and a common law damages lump sum, a different set or criteria apply.

There are a number of scenarios where a person is entitled to claim workers compensation where they might believe they are not able to.