When does a WorkCover claim end? 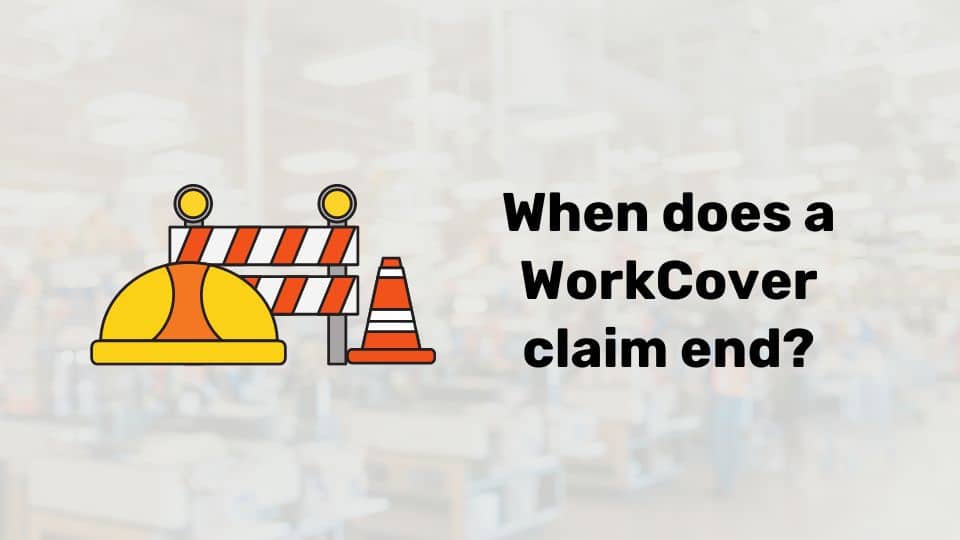 This page specifically relates to when Victorian WorkCover claims end.

You can elect to stop pursuing a claim at any time

At any point during your WorkCover matter, you can elect to stop pursuing the claim and your entitlements.

For example, if the insurer has been paying for a particular type of medical treatment expense – say your physiotherapy treatment – you can elect to no longer claim payment from them for this expense at any time.

If you’re claiming weekly payments and haven’t exhausted your entitlement to payments (explained below), at any time you can elect to no longer claim weekly payments from the insurer.

And you can elect to stop pursuing either of these lump sum claims after you’ve initiated them.

Just because you have a WorkCover claim on foot, does not mean that you are locked in to having to pursue all of your WorkCover entitlements, or even any of your entitlements.

The choice is yours as to how much you utilise a WorkCover claim once it has been accepted and therefore you can choose to end it at any time.

When you have exhausted each of your entitlements

If you elect to pursue your WorkCover entitlements, keep in mind that each of the four different entitlements have their own end points.

Technically speaking, a WorkCover claim ends completely once you have exhausted all of your entitlements.

The rest of this page will look at each of the entitlements individually.

Sometimes the WorkCover insurer may terminate your entitlement to the payment of all medical and like expenses.

Or, they may reduce your entitlement to individual types of treatment before terminating them.

For example, if they’ve been paying for your physiotherapy treatment, they may start reducing your entitlement to physiotherapy and work towards progressing you to a self managed/home-based treatment program.

Some people may assume that if the insurer has made a decision to terminate a particular type of medical and like expenses (e.g. physiotherapy or medication) or to terminate your entitlement to medical expenses altogether, that nothing can be done.

This is not correct.

If the insurer does make a decision to reduce or terminate there are options for challenging the decision.

When do weekly payments end?

If you’re certified as having a capacity for full unrestricted duties, you won’t be entitled to claim weekly payments.

Most people will have an entitlement to the payment of weekly payments for a total of 130 weeks.

Once they’ve hit the 130 week mark, in most instances the insurer will terminate your entitlement to payments beyond that point.

That’s when weekly payments will end for most people.

There are however two instances where a person will be entitled to continuing weekly payments.

The first is if they have no work capacity and that is likely to continue indefinitely.

The second way to obtain ongoing payments beyond 130 weeks is if a person has returned to work for at least 15 hours per week but is not working to the extent that they were working prior to the injury, and medical opinion is such that they are not likely to ever be able to increase their hours and earnings.

Payments in this instance would end if they were to return to their pre injury earnings level, or if their incapacity is no longer related to the work related injury.

Note – it is possible for a person to also obtain payments beyond 130 weeks for a limited period if they require surgery, however these payments will not be ongoing and will only be for a limited number of weeks.

When does an Impairment claim end?

A person’s entitlement to an impairment claim finalises once they have settled the claim.

That is, they have received an impairment benefit compensation payment – either after being assessed by an independent medical examiner (or examiners), or after attending the medical panel.

In order to settle the claim and be paid a compensation amount, they will need to have signed the worker’s response form.

Alternatively, a person’s impairment entitlement may be finalised if they fail to reach the necessary threshold level of impairment required taking into account the nature of their injury or injuries.

Keep in mind however that if a person fails to reach the necessary threshold level of impairment after the initial IME appointment, they can elect to proceed to the medical panel.

And it is only after the medical panel concludes that a person fails to reach the relevant threshold level of impairment that the claim will be at an end.

Note – in very limited instances it is possible to appeal the decision of a medical panel.

When does a Common law claim end?

A common law claim is finalised once you have signed a settlement release and been paid compensation.

This may come by way of negotiations between your lawyers and the other sides lawyers, or it may come following a successful WorkCover court matter.

Alternatively, your common law claim may end after you fail to obtain compensation.

A WorkCover claim ends when you elect to no longer pursue any or all of your entitlements.